Admittance is the price of General Admission ($8)

Living historians, demonstrations, and more can be found at this living history weekend at Historic St. Luke’s. Learn more about the Civil War’s effect on the town of Smithfield at this annual event.

Featuring “Why Aren’t They Smiling” 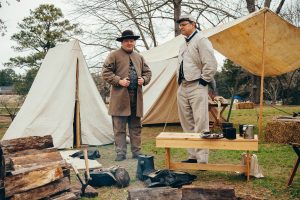 Featuring: “Shades of Grief: Mourning Clothing in the Mid-19th Century”
Lecture by Samantha Bullat, March 23 at 3 p.m.
Since the concept of a socially-prescribed process of grieving is so foreign to modern Western culture, the topic of 19th century mourning practices and mourning clothing in particular is often mired in stereotypes and misconceptions. It can be difficult to see past the cliche of the weeping widow to appreciate the role that mourning clothing played in the lives of people in the 19th century. Through an examination of period sources such as newspapers, diaries, and extant garments, this lecture seeks to create a more nuanced and humanizing understanding of mourning clothing in the mid-19th century.