Clash of Cultures: Native Americans and The Anglican Church 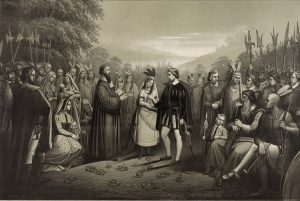 Depiction of the marriage of John Rolfe and Pocahontas

When English settlers first made contact with the Native People of North America, it was a priority that Christianity be shared and new converts won. Not just any Christianity, but the faith and traditions of the Church of England. Everyone remembers that Pocahontas married John Rolfe and was baptized into the Church of England in 1614. However, conversions were not plentiful in the 17th century. Back home in England religious tensions would eventually break out into Civil War.
Here in Virginia the Established Church of England would dominate the religious landscape. English people in Virginia were required to attend worship services and to pay taxes (Vestry taxes) to the Church. But, the high expectations for spreading Christianity in what they called the “new world” did not reach the level they had hoped for upon arriving in 1607. Perhaps this was due to the many conflicts happening within the Christianity of the Reformation? Or perhaps it was simply a clash between two vastly different cultures and world views? 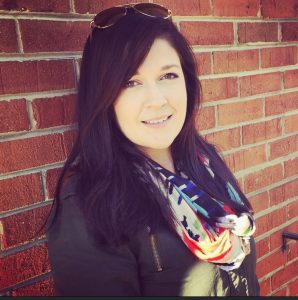 On Saturday, October 8 at 1:00 p.m. Cohen Adkins will be speaking about 400 years of history of the Native Americans and their relationship with the Church of England and later the Protestant Episcopal Church.
She is a member of the Chickahominy Tribe in Virginia. Cohen is a graduate student in Indian law at the University of Tulsa  and serves as the Secretary for Region XIV of the Diocese of Virginia of the Episcopal Church. She has been a member of the Indigenous Women’s Circle of Indigenous Ministries, and worked for the Indigenous Missioner as a Research and Communication consultant. She currently serves on the Native American Ministry Commission of the Diocese of Virginia and attended the UN Permanent Forum on Indigenous Issues 2015 as a delegate of the Episcopal Church. This background gives Cohen a unique vantage point to study and teach about the dynamic relationship between two vastly different cultures that collided with one another more than 400 years ago.

Join us for this fascinating presentation on a part of our history that has received far too little attention. Tickets are on sale now! Purchase them online here: https://stlukesmuseum.org/event/natives-peoples-of-virginia-400-years-of-interactions/, or over the phone by calling 757-357-3367.