The 14th Colony: The American Revolution’s Best Kept Secret and Other Unknown Facts

The 14th Colony: The American Revolution’s Best Kept Secret and Other Unknown Facts 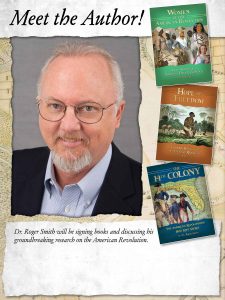 This lecture is sponsored and presented by members of the Colonel William Allen Chapter of the DAR in Smithfield. The presentation is entitled, “The 14th Colony: The American Revolution’s Best Kept Secret and Other Unknown Facts” and is free and open to the public.

Did you know that on December 1, 1775, the British launched a full-scale invasion of the southern colonies, dubbing the campaign the ‘Southern Expedition”? Or that the British plan for success was never centered on cutting off the head (New England) to kill the snake, but rather to rip out the heart (Virginia) as the key to victory? And what of the role of women as spies, soldiers, and stalwarts of independence. Come hear Dr. Roger Smith as he brings his 5½ of research from the British National Archives and the Library of Congress to Smithfield with his talk, “The 14th Colony: The American Revolution’s Best Kept Secret and Other Unknown Facts.”

Dr. Smith received his Ph.D. in Early American History and Atlantic World Studies from the University of Florida in 2011. His work on the American Revolution in the South has received the Aschoff (ASH-hoff) Fellowship Dissertation Award and the Jack and Celia Proctor Award in Southern History.

Dr. Smith now represents Colonial Research Associates and speaks nationally on his Revolutionary War research. He has provided consultation for the AMC television series Turn, and worked on projects with the Florida Humanities Council, the University of West Florida, the University of Florida, and the City of St. Augustine. Dr. Smith sits on the national committees for Education, History, and Historic Sites and Celebrations for the Sons of the American Revolution, and received a national award from the S.A.R. for “furthering the preservation of United States History and its traditional teachings in our schools” for his books on the American Revolution.

The presentation will begin at 1 p.m. and is being held at Historic St. Luke’s.

Please direct all questions to Leslie Neel via email at bnlneel@charter.net.