Book Launch and Signing of Hamilton: An American Biography

Book Launch and Signing of Hamilton: An American Biography 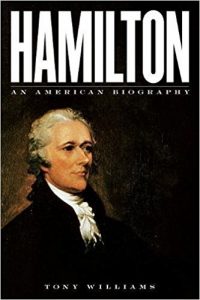 In Hamilton: An American Biography, Author Tony Williams provides readers with a concise biography that traces the events and values that enabled Hamilton to rise from his youth as a dispossessed orphan to Revolutionary War hero and Founding Father, a life uniquely shaped by America and who, in turn, contributed to the creation of the American regime of liberty and self-government. He was one of key leaders in the American Revolution, a chief architect of America’s constitutional order of self-government, and the key figure in Washington’s administration creating the institutions that governed America. Williams expertly weaves together biography with historical events to place Hamilton as one of the most important founding fathers.

Tickets are $15 per person. Light refreshments will be provided.