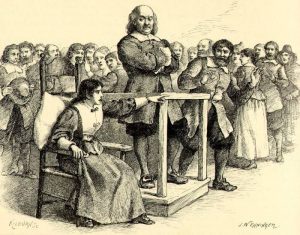 Due to popular demand, a second lecture has been added on November 4th beginning at 3 p.m. and ending at 4 p.m.

The witchcraft mania that swept through Salem, Massachusetts in 1692, while significant, has tended to overshadow the historical records of the persecutions of alleged witches in other colonies. Colonial Virginians shared a common belief in the supernatural and the existence of witches with their northern neighbors, and throughout the seventeenth and early eighteenth centuries, they conducted several witchcraft inquiries.

Join with historian Carson Hudson as he explores the often-misunderstood subject of witchcraft persecution in early Virginia. His offers insights into the beliefs, occurrences, and legal proceedings regarding witchcraft in early Colonial Virginia, separating historical fact from historical fiction. Beware! It’s not exactly as Monty Python depicts it!

Tickets will be $15 a person. Light refreshments will be provided.