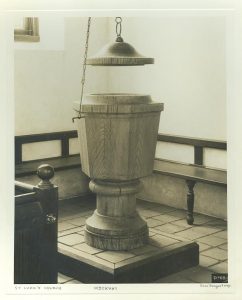 “Whose time-tinted bones are slowly reverting to dust at the bottom of a shallow grave in the [“Old Brick Church”]?” (Smithfield Times, 1956) This is one of the many mysteries which intrigues Historic St. Luke’s Church, and is the motivating force behind our continued research. Within this blog we will discuss the mystery grave beneath the baptismal font, and the pieces of evidence that could perhaps tell us more about this enigma.
On February 26, 1956, directors of Historic St. Luke’s Restoration and John D. Hatch, Director of the Norfolk Museum (present day Chrysler Museum of Art), mused over the relics brought up from the sandy earth. The team that discovered the grave had high hopes that it would be the final resting place of previous pastor, Reverend Andrew Munro, buried in 1719. The grave was also speculated to be the final resting place of Miss Northsworthy, buried in 1666. According to Stephanie Golda from the University of Missouri, at this point in history forensic anthropology was just starting out and most archeologists could not tell the difference between male and female remains, nor did they have any way of knowing how long the bones had been there. Without modern anthropology, the 1950s team relied on the artifacts they found within grave to answer their many questions. 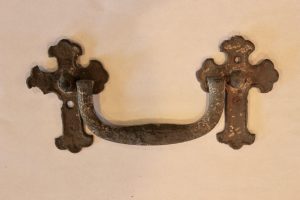 For example, John Acton recovered half a dozen ornamented swing bail coffin handles, two of which Historic St. Luke’s Church currently has within their artifacts collection. One of the most interesting details about the handles, is that they are not matching. Department Chair of Anthropology at the National Museum of Natural History, Laurie Burgess, shared with us how she has never encountered mismatch coffin handles from a single grave before, and thinks it is highly unusual. So much so, she would wonder if there were perhaps two burials present. 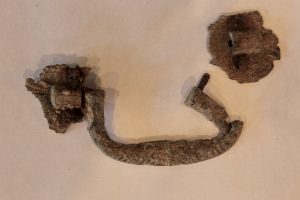 The 1950’s team thought the coffin handles could have originated from the early 18th century, however our source at the National Museum of Natural History concurred with our analysis that the handles dated from the 1860s to the early 20th century. Our team at Historic St. Luke’s Church has also placed them within this time period due to a movement happening known as “The beautification of death.” Part of this trend involved mass production of decorative coffin hardware, (such as our coffin handles). These handles also reflected a 19th century Victorian style, as they both have elaborate detailing. 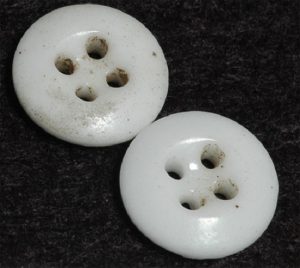 Prosser, four-hole dish type. (Similar to buttons that would have been found in the grave)

The second piece of evidence the 1950s team discovered, were two porcelain buttons. Archaeologist Anatolijs Venovcevs, at the Wilfrid Laurier University, says the trend towards ceramic buttons occurred in 1840 “when Richard Prosser patented his dry porcelain mould method.” This method enabled the ingredients of ceramics to be finely pressed and fired in an industrial manner. Burgess from the National Museum of Natural History reminded us that “If we don’t have the buttons then this identification is a bit speculative, but this kind of button has been identified in the past as being china, porcelain or milk glass” So the 1950s team could have easily mistaken milk glass or china for porcelain.
Since the 1950s the archaeological field has made many advancements in the study of material culture and determining dating has become a more accurate process. For example, very recently Historic St. Luke’s Church preformed ground penetrating radar around the church, and found evidence of as many as 400 unmarked graves. Unfortunately, the ground surrounding the baptismal font was not covered by the radar study. Until we can do more research on the mystery grave under the baptismal font, let me leave you with these final thoughts. Based off of our studies, we can assume the burial date for the mystery grave ranges from 1860 to 1900 due to the coffin handle dates. We are also very curious as to why two different types of handles were found, and wonder if two graves are perhaps present. Here at Historic St. Luke’s Church we are excited to be exploring these subjects with current and modern resources, and we invite you to stay tuned for future posts.
If you are interested in seeing the baptismal font or our coffin handles which are on temporary display, please go online and purchase your tickets for our Twilight Cemetery Tours happening this Friday, October 27th 2017, and this coming Saturday the 28th, 2017. We have limited tickets left, so purchase today! Link for tickets below.
https://stlukesmuseum.org/events/
Works Referenced:
Venovcevs, Anatolijs. “Dress for Life and Death: The Archaeology of Common Nineteenth Century Buttons.” Archaeological Services Inc., Toronto. (April 6, 2013). Received from, http://www.fitp.ca/articles/FITPXXIII/Dress_for_Life_and_Death_Paper.pdf
Bell, Edward. The Historical Archaeology of Mortuary Behavior: Coffin Hardware from Ux bridge, Massachusetts. The Historical Archaeology of Mortuary Behavior 24, http://www.fitp.ca/articles/FITPXXIII/Dress_for_Life_and_Death_Paper.pdf
Golda, D. Stephanie. “A Look at the History of Forensic Anthropology: Tracing My Academic Genealogy.” Department of Anthropology, University of Missouri 1, 1 (2010). https://docs.lib.purdue.edu/cgi/viewcontent.cgi?article=1002&context=jca
Clay, Swindell. “Ground Penetrating Radar Survey at St. Luke’s Church (046/0024/44IW0271) Isle of Wight County Virginia. (March 2017)
“Bones Dug up in St. Luke’s Church Pose Mystery.” Smithfield Times (Smithfeild, VA), April 1956. https://virginiachronicle.com/cgi-bin/virginia?a=d&d=TSMT19560419.1.8&srpos=1&e=——-en-20–1–txt-txIN-bones+mystery+historic+st.+luke%27s——