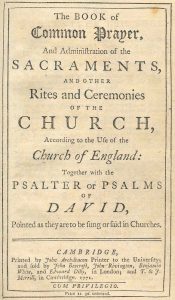 On Sunday, September 11, 2016 Brett Walker of Colonial Williamsburg will be at Historic St. Luke’s Church as part of our event; The General from Whitemarsh, a Celebration of Joseph Bridger. Brett will lead us through a service of the word from the 1662 Book of Common Prayer with a sermon from the period. Brett works as a shoemaker at Colonial Williamsburg and has a particular passion for understanding and interpreting the various faith perspectives of the Colonial era. Brett has presented at various sites including Fort Ticonderoga and Fort Mackinac.
In the 17th Century the Established Church of England dominated the religious landscape. Colonists were compelled to materially contribute to the Church of England, both through their worship attendance and through Vestry taxes. Failure to attend services and pay your taxes was punishable by fine and or imprisonment. The standard service book at the time of Col. Joseph Bridger was the 1662 Book of Common Prayer (The standard Service Book of the Church of England containing all of the rites and ceremonies of the Church and including a Psalter or the collections of Psalms. The original version of the Book of Common Prayer was first printed in 1549 and was largely the work of Archbishop Thomas Cranmer. Following the tumultuous period of the English Civil Wars (1642-1651) a new version of the Book of Common Prayer was ordered. This version remains the official version of the Church of England to this day (though many parishes use a more updated version). 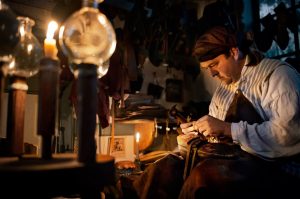 On September 11 we will be using a non-Communion service (Morning Prayer) from the 1662 Book of Common Prayer. This will be for the purpose of history and understanding the religious context of that late 17th century. Brett Walker will also be leading a discussion about the religious environment of that period and contrasting it to our more modern context. Religion was viewed very differently in the 17th century. There was no separation of church and state, the state was the church and the church was the state. The head of the English Church was and is the monarch. As we became a new nation in the late 18th century issues of church and state would be at the forefront of the debates over an American Constitution which ultimately led to laws protecting religious liberty and freedom of thought and worship.

We hope you’ll join us for this unique opportunity to understand a very different time in our history and to join the continuing discussion about our first freedom. The Service will be held on Sunday, September 11 at 11:00 a.m. in the sanctuary of the Old Brick Church (Historic St. Luke’s Church).
Admission to the service and all of the weekend’s events is included in the price of general admission.  For more information on the interpretive service call our Welcome Center at 757-357-3367.