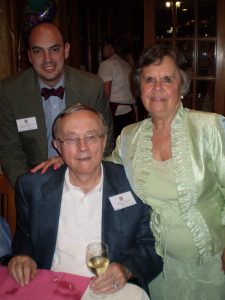 The author of the cryptic epitaph on the gravestone of Gen. Joseph Bridger (by 1631/2-1686) now in the chancel of St. Luke’s Church queried: “does nature silent mourn and can dumb stone make his true worth to future ages known?” Whoever that author was, he/she profoundly predicted what indeed happened–Bridger’s near total obscurity.

Until August of 1994 with a chance visit with my mother to St. Luke’s Church, I had never heard of him–despite years of interest in Colonial Virginia history and genealogy. My mother advised me that day that she thought we descended from him, and it did not take me long to document the connection. My new-found ancestor’s tragic obscurity captured my imagination as I began to learn just what a significant individual Joseph Bridger was: he was nothing less than one of the most influential and accomplished Virginians in the second half of the seventeenth century. That day in 1994 was the beginning of an incredible journey.

It led me to discover Whitemarsh Plantation and to enjoy years of friendship with the owners of its central 112 acre core–Bernard & Helen Ferguson. I met by phone Bridger cousin Elmer O. Parker, who had written a revealing biography of Joseph Bridger, entitled The King’s Henchman, which was published in the 1957 Virginia Cavalcade. He, in turn, encouraged me to produce what became my self-published work The Landed and Personal Estate of Gen. Joseph Bridger in 2001, with a second edition in 2007–that explored Bridger’s vast landholdings, his tremendous brick manor house known from its room-by-room inventory, and his associations with the construction of the “Old Brick Church.”

It was my great hope that the portion of Whitemarsh owned by the Fergusons could someday be returned to the family in perpetuity and that a full archaeological survey of this property could be done. That dream seemed a step closer to reality when, with Bridger cousins Jean B. Tomes and James A. Bridger, we founded the Bridger Family Association, and there was palpable energy in the air when we had our first meeting at St. Luke’s in May of 2006, and Dr. Doug Owsley from the Smithsonian Institute sought our permission to exhume our ancestor from his tomb in the church in connection with the forthcoming Written in Bone exhibit at the Smithsonian’s National Museum of Natural History.

The hope of a facial reconstruction and new details about our ancestor that only modern forensics can provide seemingly came to fruition when St. Luke’s was the scene in January 2007 of Bridger’s exhumation by Dr. Owsley and his team–only to discover that Bridger, whose remains and gravestone had been moved into the church in 1894 from Whitemarsh, was only twenty percent there. Efforts to locate his original gravesite at Whitemarsh to recover the rest of him before a planned 15 April 2007 reinternment service at St. Luke’s were unsuccessful. A likely record attendance of over 200 Bridger descendants and others attended that Sunday, on the 321 anniversary of Bridger’s death with a looming st noreaster threatening the occasion, to commemorate the man whose long obscurity was beginning to lift–with all of the associated local news coverage and his inclusion in the Smithsonian exhibit.

After three years of searching, Bridger descendant Bill Hodsden learned that a ninetyyear- old close cousin, Wilford Ivanhoe Hodsden, Jr., knew of the location of the Bridger cemetery. So, in August of 2010, armed with site photographs and a satellite ariel image, Bill and his wife Barbara drove up to the nursing home in Cape May, New Jersey, where his cousin then lived, and the older gentleman was able to specifically pinpoint the location of the cemetery on all of the material that he was shown. He explained that, when he was young, he had been shown the site by his father Wilford Ivanhoe Hodsden who, in turn, as a boy had witnessed the 1894 move of Joseph Bridger’s bones from Whitemarsh to St. Luke’s. Wilford Hodsden died one month after this visit. And that month, Bridger family descendants funded archaeologist Alain Outlaw’s cursory survey of the cemetery site that lead to the discovery of two eighteenth century graves in late September–confirming the old gentleman’s identification of the colonial cemetery site. It was, however, not then feasible to further excavate the site.

Uncertainty then loomed in 2014, with the death of the beloved Helen Ferguson, as to what would happen to Whitemarsh–as the property was to be sold with a man named David English to get half of the proceeds. The tremendous leadership of Bill Hodsden with a consortium of other Bridger descendants led to their purchase of the ten acre portion of the 112 acre Whitemarsh farm containing the Bridger mansion and cemetery sites in 2017. Then, through a grant of Towne Bank and the support of Historic St. Luke’s Church, funding was available to undertake a full archaeological survey of this property by Alain Outlaw, whose wife Merry is not only a Bridger descendant but is also the curator of Historic Jamestown’s vast artifact collection, that is currently ongoing.

With the most important part of the original 1,700 acre Whitemarsh Plantation back in family hands and a full archaeological survey ongoing, it was a dream come true. Bridger descendants can look forward to a full understanding of the significant size and magnificence of Gen. Bridger’s seventeenth century mansion. In addition, it is anticipated that Bridger’s original grave will soon be found so that a facial reconstruction can be done to give descendants a face-to- face encounter with their ancestor and so that his remains can eventually be reinterred together at St. Luke’s.

As good as these things are, that was not all. It was learned that David English decided to buy the remaining 102 acre balance and to make its Victorian house a new home for his family. He, then, learned in 2017 from his aunt that he is himself a double descendant of Gen. Joseph Bridger! So, my dream of years ago has now really come true with the entire 112 acres now back in the family, a full archaeological survey is being done, and the education of the public of Bridger’s forgotten significance by the anticipated display of the excavated artifacts at St. Luke’s.