Artifact of The Month (March) 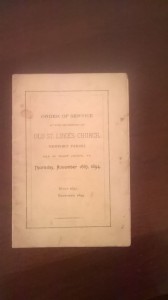 In the last decade and a half of the 19th century, the people of Christ Episcopal Church were engaged in a great effort to restore the “Old Brick Church” also known as St. Luke’s. The Reverend David Barr presided over a national campaign to restore the old 17th century structure. A great deal of work had to be done, including work on the tracery windows, buttresses and massive interior renovations. They restored the building much to their own Victorian style rather than 17th century. They installed stain glass windows that honored loved ones and figures from Virginia and American history. The order for service for the dedication on November 16, 1894 includes a brief and incomplete listing of Rectors from both the Colonial time and its brief history as an Episcopal Church building.
The service was presided over by Bishop Alfred M. Randolph D.D. who also delivered the sermon. Rev. Barr was brought back for the dedication, as he had moved on to a Parish in Maryland. As part of the dedication of the newly renovated building, the bodies of Col. Joseph Bridger and Anne Randall were reinterred in the chancel. Bridger is believed to be the benefactor whose estate was materially responsible for the construction in the 17th century structure.
VIEW ALL