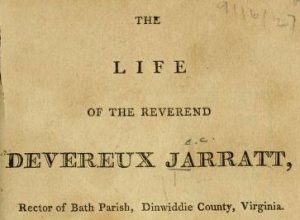 Who was Reverend Devereux Jarratt and why does he matter? These questions and more will be answered by Dr. Michael Browder on August 26th during his 1 p.m. lecture at Historic St. Luke’s. The lecture will explore Reverend Jarratt’s early conversion by New Light Presbyterians, his ambivalent relations with the Methodists, his late-life reflections on Christian Perfection, and more. Museum Interpreter John Ericson recently interviewed Dr. Browder about his upcoming lecture.

John Ericson: “Dr. Browder, we’re excited to have you lecture at Historic St. Luke’s this Saturday. Would you tell me how you came to learn about Reverend Devereux Jarratt and his impact on Colonial Virginia?” 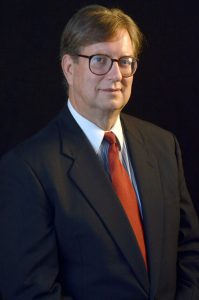 Dr. Browder: “Devereux Jarratt is noted in the history of the first Methodists in Virginia as being an Anglican who cooperated with their work.  As it turns out, he probably laid the foundation for the first great revival which was later taken over by the American Methodist preachers and led to their ultimate success on this continent.”

John Ericson: “I would imagine that being a more evangelical Anglican would have been difficult in 18th-century Virginia. What kind of response did Reverend Jarratt receive from within Anglican circles?”

Dr. Browder: “His relationship with fellow clergy was very difficult.  They preached, or hired others to preach, lifeless sermons while they lived off the fat of the colony.  One fellow cleric chided Jarratt on preaching outside his parish as a violation of church canons. Devereux silenced the complaints by replying that this gentleman’s horse racing and card playing were also a violation.  It is no wonder that he was usually not welcome when he attended the conclave in Williamsburg.  On the whole however, there were so few clergy for the vast domain of the colony, that Rev. Jarratt could generally do as he pleased.”

John Ericson: “The First Great Awakening had a significant impact on the American religious experience. What lasting impact do you see from that movement?”

Dr. Browder: “Funny you should ask this question.  It is my little-published theory that there were not two ‘Great Awakenings,’ but rather one long expansion of evangelical religion running from Jonathan Edwards to the Civil War.  I would cite Devereux Jarratt as one of the earliest transitional figures who was transformed by the end of the “First Awakening” and had an impact on the beginning of the ‘Second’.” 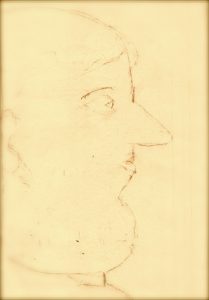 John Ericson: “Here at Historic St. Luke’s, we talk a lot about the pursuit of religious freedom. How do you think clergy like Devereux Jarratt contributed to the movement towards religious freedom in America?”

Dr. Browder: “Religious freedom is rather a two-edged sword.  It was largely detrimental to the Established/Episcopal Church in Virginia.  The general neglect of religious matters by the Episcopal establishment  allowed the Baptists to run amok.  It was the latter who pushed for religious freedom laws.  Ironically, the Methodists had it both ways.  They claimed protection as part of the Anglican fold prior to the Revolution, but after the war, they launched a separate denomination which seriously undermined the Episcopalians.”

John Ericson: “Dr. Browder we’re eager to have you with us on August 26th. Thank you for taking some time to chat with me.”

The lecture is August 26th, 1 p.m. to 2 p.m. at Historic St. Luke’s. Tickets are is $15 each and should be purchased in advance as seats are limited. Light refreshments will be provided.
VIEW ALL