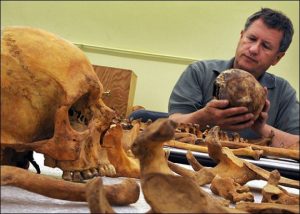 In 2007 the Smithsonian Institute was in the midst of a project called Written in Bone, a project that offered biographies through human remains found at Jamestown and at Historic St. Luke’s Church. Col. Joseph Bridger of Whitemarsh (1629-1686) was one of the wealthiest people in Colonial Virginia in the late 17th century. He was two time interim Governor and the leader of the Colonial Military during the second half of the century. Bridger was exhumed from his grave at White Marsh in 1894 as part of the restoration of the church building he helped to create.
Dr. Doug Owsley, the leading forensic anthropologist in the nation, was the head of the team that exhumed numerous 17th century burials from Jamestown and Col. Bridger’s remains buried in the chancel at St. Luke’s. Only 20 percent of Bridger’s remains had been removed from White Marsh and brought to St. Luke’s, along with some animal bones.  Owsley and his team determined that Bridger’s cause of death was lead poisoning. Wealthy people often had this ailment due to a number of household items including lead glazes on pottery and lead crystal glass. Bridger’s lead levels were at 149 ppm or seven times the normal level. 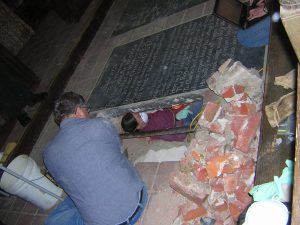 Dr. Doug Owsley will return to Historic St. Luke’s on Saturday, September 10, 2016 as part of our weekend event; “The General From Whitemarsh: A Celebration of Joseph Bridger”. He will discuss the legacy of this important Written in Bone project. Dr. Owsley is the leading figure in his field, who has often worked with the FBI and other Law enforcement agencies to examine human remains and determine cause of death. Dr. Owsley is the Division Head of the Smithsonian’s National Museum of Natural History. Dr. Owsley worked on cases from Jeffrey Dahmer’s victims and victims of the 9/11 attack in Washington D.C. He has worked closely with Dr. William Kelso of Jamestown Rediscovery and their recent exhumations in the 1608 chapel at Jamestown that uncovered four bodies including the first English Clergyman in America, Rev. Robert Hunt. Dr. Owsley will speak at Historic St. Luke’s at 2:00 p.m. on September 10 in the church building.

The cost of the event will be our normal entrance fees; $8 Adult, $6 for Seniors/Military and AAA. Student and Educator tickets are $5 and children under 5 are free.
The event will also feature brick making, 17th century reenactors and a 17th century worship service using the 1662 Book of Common Prayer. We hope you’ll be a part of this important event that helps us to understand an important era in our American history. For more information visit the event page by clicking here, or give us a call at 757-357-3367