Jamestown: A Story of Unexpected Survival

A 1972 New York Times article referred to Jamestown as “the blunder that started America.” The author, H.H. Morris, certainly had a lot of fodder to support his claim that Jamestown was a complete and utter failure. Between the 1607 founding of Jamestown and 1624, the colonists faced a staggering mortality rate. From waterborne illnesses to malaria, from drought to the Starving Time, Jamestown seemed doomed to follow in the footsteps of the failed venture at Roanoke Island that became the “Lost Colony.” But Jamestown did not disappear. In fact, it survived to remain as the capitol of the Virginia Colony for 92 years. Can Jamestown really be deemed a blunder and a failure? What was it that kept the colony going in the face of disease, famine, and warfare? The evidence seems to offer more questions than answers.

A continued influx of new English settlers is certainly one of the answers to how Jamestown survived, but new arrivals also created a strain on the already limited resources that kept the site alive. The winter of 1609/10 saw the number of colonists drop from 300 to 90, 60 of whom were at Jamestown. This was the beginning of the Starving Time. Hundreds more arrived in June of 1610 along with the leadership of Lord De La Warr, but the mortality rate continued to climb with each ship carrying new arrivals. Why would people keep coming to Jamestown given the staggering odds against survival?

Another possible answer to Jamestown’s survival comes from Sir Thomas Dale’s venture in 1611, the founding of Henricus. The obvious answer to limited resources in one location is to branch out. Henricus, near present day Richmond, was one of those experiments. Soon would come the “Hundreds.” Bermuda Hundred was founded in 1613 and Martin’s Hundred in 1618. These ventures allowed the Jamestown settlement to manage its meager resources better. But warfare took its toll on these settlements. In fact, Martin’s Hundred was entirely annihilated at the beginning of the Second Anglo-Powhatan War in 1622. Why would anyone continue to invest in this seemingly failed economic experiment?

By 1624, the charter of the Virginia Company had been revoked and Virginia would henceforth be directed by the Crown as an official royal colony. But why continue to pour more resources in the form of people and supplies into an endeavor that had proven so devastating for nearly two decades? Tobacco would seem to be the answer.

In 1610/11, one of those new arrivals to Jamestown, one John Rolfe, began to experiment with tobacco seeds he had acquired in the West Indies. This type of tobacco was far more pleasing than what was native to eastern Virginia. While the first Settlers in 1607 had hoped to find the same precious metals that the Spanish Colonies had found, it would be tobacco that helped maintain this fledgling English Colony in the “New World.” Sadly, this labor-intensive crop would also support one of the greatest crimes against humanity – the Slave Trade.

The first workers in the tobacco fields of Virginia were indentured servants but this practice became less popular by the mid 17th century. The solution? Kidnap and export West African people to Virginia to make their English captors rich. While the first West African people arrived at Jamestown in 1619, there were relatively few African enslaved people in the “New World” until after 1650. But the second half of the 17th century would see an enormous increase as boats arrived with hundreds of captives.

While the first colonists came with an eagerness to spread English Christianity to the native population, faith became an obstacle to the peculiar institution of chattel slavery. New laws had to be passed to ensure that baptism did not alter one’s status. In other words, laws were created to ensure that enslaved people could not use baptism as a means of escaping captivity by becoming an English Christian equal to their white counterparts in the eyes of God. Instead, a tobacco industry thoroughly built on an institution of slavery that would last for generations would grow, thrive, and economically prosper, bringing the riches that investors had hoped for all along. Could the first colonists that came on the Godspeed, the Susan Constant, and the Discovery have ever imagined that their survival would hinge on the forced subjugation of millions of people who never offended them?

The English Civil War of the 1640’s brought a wealthy refugee population to the colony that had a decidedly loyalist bent. King Charles I would dub Virginia the “Old Dominion” because of its devotion to the Crown. More warfare with the Powhatan Chiefdom would follow as well as a rebellion that nearly destroyed the Jamestown Settlement. In 1676, Nathanial Bacon, a misguided narcissist, lead hundreds of disaffected farmers to burn Jamestown to the ground. After Bacon succumbed to dysentery in October of the same year, the rebellion failed and Jamestown began to rebuild again. Finally, a fire in the state house in 1698 convinced the House of Burgesses to move to Middle Plantation, later Williamsburg, the following year. Jamestown continued on as a tobacco plantation before becoming almost entirely abandoned. Was this the end of the blunder that started America? Was Jamestown a colossal failure? Or was it an experiment that continues to be tested in times of adversity and challenge? One thing is for sure; the history of Jamestown leaves us with more questions than answers. 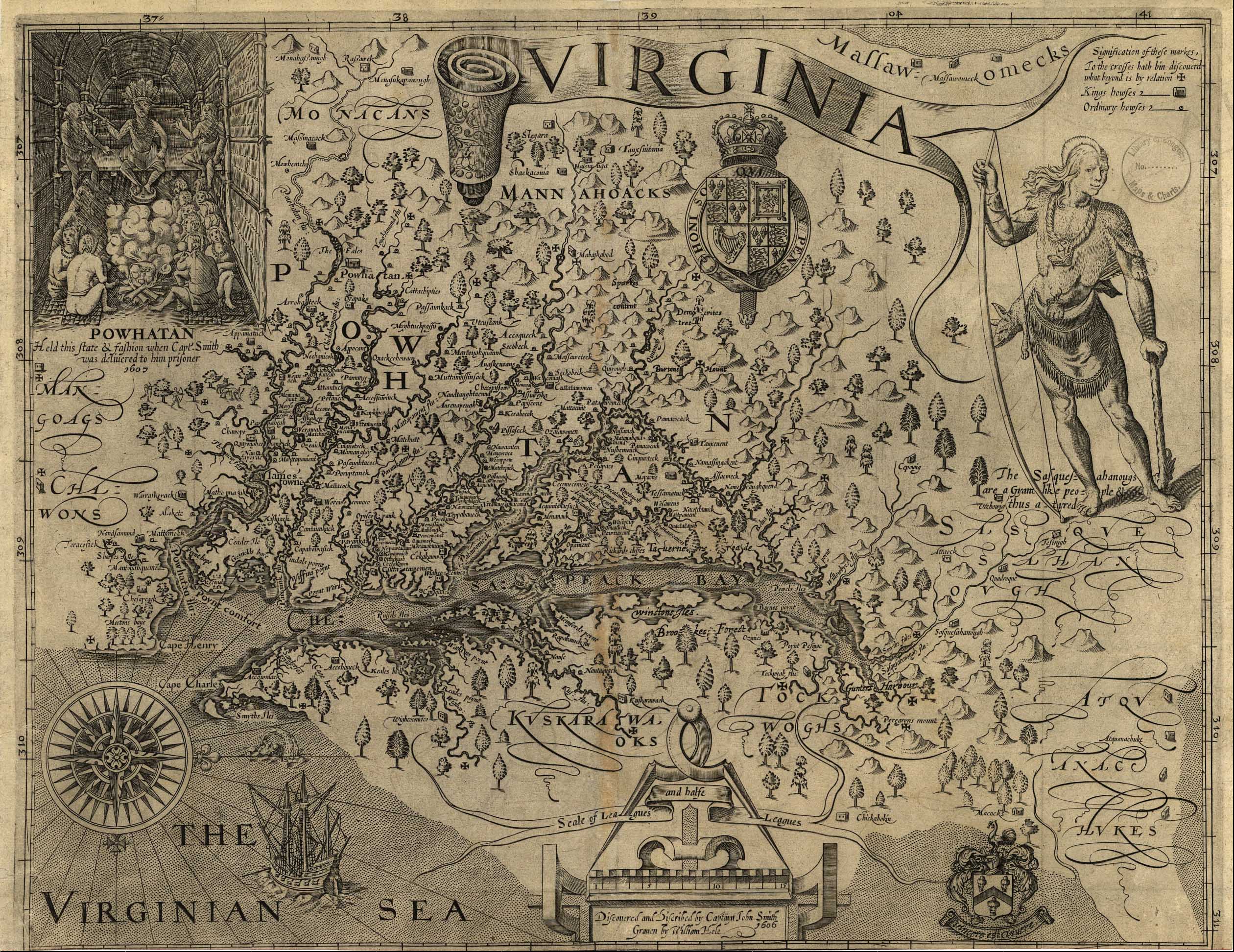 John Smith, “A Map of Virginia: With a Description of the Countrey, the Commodities, People, Government and Religion,” (1612).

Lost Colony: (Roanoke Colony) In 1587, a small colony was founded on an island off the eastern coast of North America. The settlement would have been the first permanent English colony in the New World, had the settlers not disappeared owing to unknown circumstances. The lost colony of Roanoke is one of the most notorious mysteries in American history; the cryptic clues left at the abandoned settlement and the lack of any concrete evidence make it the focus of wild speculation and theories. (Encyclopedia Britannica)

The Starving Time was the winter of 1609-1610, when food shortages, fractured leadership, and a siege by Powhatan Indian warriors killed two of every three colonists at James Fort. (Jamestown Rediscovery: Historic Jamestowne)

Thomas West, or Lord De La Warr, was an English politician who was appointed as governor-for-life of the Virginia Colony in 1610. De La Warr arrived at Jamestown in June of that same year, effectively saving the colony from destruction. His fleet of 3 ships blocked the fleeing voyage of the remaining Jamestown colonists which only made it 12 miles downriver before meeting De La Warr’s relief expedition. He provided Jamestown with 150 new settlers, much-needed provisions, and the leadership needed to stabalize the colony after the Starving Time. De La Warr returned to England in Spring of 1611 and passed away at sea during a voyage back to Jamestown in 1618 in response to unrest in the colony. His name may look familiar as both the Delaware River and state of Delaware were named after Thomas West, Lord De La Warr.

The Second Anglo-Powhatan War was fought from 1622 until 1632, pitting English colonists in Virginia against the Algonquian-speaking Indians of Tsenacomoco, led by Opitchapam and his brother (or close kinsman), Opechancanough. (Encyclopedia Virginia)

Though John Rolfe is certainly known for his introduction of an improved tobacco crop to Virginia that would become the building block on which the colony’s economy would be based, Rolfe is perhaps best known as the husband of Pocahontas. He married Pocahontas in April 1614 after she converted to Christianity and changed her name to Rebecca. Though their marriage ultimately ended the First Anglo-Powhatan War and holds great historical significance, much mystery and controversy still surrounds the life and death of Chief Powhatan’s daughter.

Indentured Servants: (Noun) a person who signs and is bound by indentures to work for another for a specified time especially in return for payment of travel expenses and maintenance (Merriam-Webster Dictionary)

Chattel: (Noun) [in general use] a personal possession. (Oxford Dictionary)