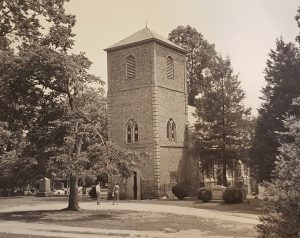 On October 12th, 1956, President Dwight Eisenhower wrote a letter to Mr. Henry Mason Day, the first president of Historic St. Luke’s Restoration. In this letter, President Eisenhower commended those involved in the restoration of Historic St. Luke’s Church and declared that, “St. Luke’s, more than a time-hallowed relic of the past, will be an enduring witness to the spirit that animated them [our forefathers] for within its walls our forefathers gained new courage, firm perseverance, [and] abiding strength to make of the wilderness a home for themselves and all who followed them.” With the help of the Eisenhower Presidential Library, 4 previously unknown documents that explore President Eisenhower’s October 12th letter were shared with me, Research Assistant Lauren Harlow. As October 12th approaches, we recognize this letter and its significance to our site as it represents the importance of Historic St. Luke’s, a symbol of our enduring religious freedom and national pride. 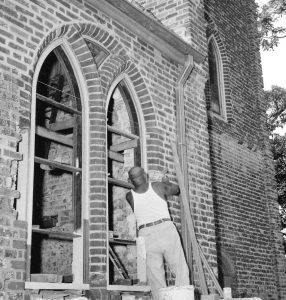 I invite you all to embark on this journey back in time to explore these 4 documents and the October 12th letter from President Eisenhower. The year is 1956. Henry Mason Day and his colleagues have officially announced that Historic St. Luke’s will open to the public on May 15th, 1957, unveiling the 4-year-long restoration during the Jamestown Festival. Years of hard work, extensive fundraising, and careful planning have led up to this unveiling. But how does the then-President of the United States tie in to a development taking place in Smithfield, Virginia, far from the politics of Washington D.C.? On September 4th, 1956, roughly 8 months before Day’s announcement regarding the completion of the 1950’s Restoration of Historic St. Luke’s Church, Mr. Henry Mason Day sends a letter to the White House. According to Day in his September 4th letter, many of those who donated to the restoration were inspired by the spiritual atmosphere President Eisenhower was creating anew. The October 12th letter previously mentioned soon arrived in response, congratulating all that had helped in restoring Historic St. Luke’s.
The body of the October 12th, 1956 letter is as follows:
“All those who have helped toward the restoration of Historic St. Luke’s, known to America as ‘The Nation’s Oldest Church’, have preserved for generations to come a great symbol of our spiritual heritage.
This monument to the founders of our country is in truth a national shrine. Visitors there, inescapably, will be reminded of the deep religious convictions of the first settlers, their faith in God and their faith in themselves as children of God. St. Luke’s, more than a time-hallowed relic relic of the past, will be an enduring witness to the spirit that animated them for within its walls our forefathers gained new courage, firm perseverance, abiding strength to make of the wilderness a home for themselves and all who followed them.
My congratulations go to you and to all associated with you in the campaign to restore St. Luke’s, and my warm thanks to all who helped with their contributions.” 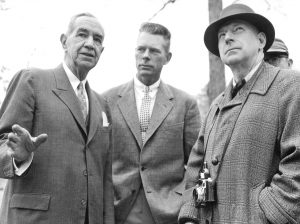 Henry Mason Day was thrilled by the letter, and to express his gratitude, he writes back to Eisenhower on October 19th, 1956, thanking him for his letter as well as his “generous and understanding interest.” In this moment, Historic St. Luke’s becomes recognized on a national level. According to our findings, President Eisenhower responds to Henry Mason Day one last time, in a telegraph sent on May 17th, 1957. In his telegraph, President Eisenhower congratulates them on the completion of the 1950’s Restoration, calling Historic St. Luke’s an important shrine where, “people can renew their strength in the faith of our fathers.” 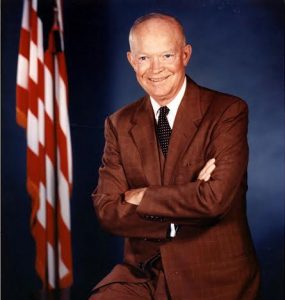 Today we hear a lot of political pundits making strong statements on how Americans reconcile their national identity. While some Americans express embarrassment, others feel a sense of pride. At Historic St. Luke’s we believe that patriotism is not exclusive to a political party, and that better understanding of our history and core values as a nation will unite us. As we evolve as a nation in the 21st century, may Historic St. Luke’s continue to be a symbol of our nation and the freedoms we enjoy. Thanks to our forefathers, we have the ability and freedom to practice religious autonomy, and that right cannot be taken away. We are not perfect, but it is through this history that we can be a better nation for generations to come. Thank you for joining me on this journey, and I leave you with this final quote: “At such a time in history, we who are free must proclaim anew our faith. This faith is the abiding creed of our fathers. It is our faith in the deathless dignity of man, governed by eternal moral and natural laws.” –President Eisenhower 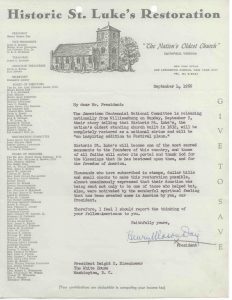 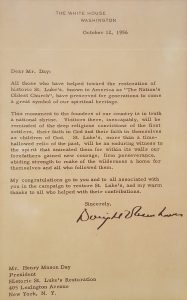 October 12 letter form Eisenhower to Mason Day, declaring the Church a national shrine, and congratulating all who worked on it. Document courtesy of Eisenhower Presidential Library. 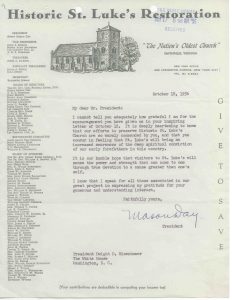 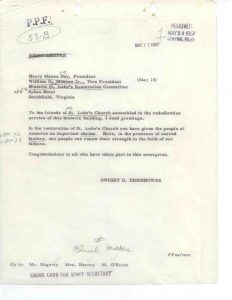