Mystery of the Lost Colony Solved? Not So Fast!

A recent Virginia Pilot headline declared “Mystery Solved,” referring to the long unanswered questions about the English attempt at Colonization of the New World in 1587 on what is now the Outer Banks of North Carolina. This so-called “Lost Colony” has been the subject of many archaeological digs, theories, conjecture, a quaint play, and even a horror movie. What happened to those 114 people who sought to compete with Spain, England’s chief rival, in reaping the benefits and resources of the New World? A recent book, The Lost Colony and Hatteras Island, claims to have uncovered the truth of this mystery, debunking the myths surrounding the fate of these late 16th century adventurers.

Scott Dawson is a Hatteras Island native who has been researching the history of this fascinating time period for most of his life. He is a graduate of the University of Tennessee with a B.A. in psychology and a minor in history, and the president and founder of the Croatoan Archaeological Society Inc. Dawson engaged archaeologists from the University of Bristol in the UK, under the direction of Dr. Mark Horton, to uncover the mystery of the “lost” colonists. Their conclusion is that the colonists were not lost at all, but that they assimilated into the Croatoan people, the native inhabitants of present-day Hatteras Island. This theory, while it has been considered and explored for quite some time, has been difficult to prove.

Scott Dawson suggests that the new location of the colonists was clear to the relief party that came back in 1590 under the leadership of Governor John White. White reportedly told the colonists before his departure back to England that they were to leave word of their whereabouts on nearby trees. When White saw the markings of “Croatoan,” Dawson argues that White new exactly what this meant – that the colonists had gone to live amongst the Croatoan people. In stark contrast to the violence between the English and Indigenous peoples of 17th century North America, this would be a shining example of how people of different cultures can unite and live peaceably with one another. It is an appealing narrative.

Mystery Solved! Well, maybe not. Many archaeologists, anthropologists, and historians are questioning the validity of the strong claims made by Dawson and Dr. Horton. The evidence that Dawson offers up is a large quantity of material culture that proves contact between the English colonists and the Croatoan people. The issues with the evidence are numerous, chief among them being that the Croatoans could have obtained these material culture items through trade rather than through assimilation and intermarrying.

Another issue, raised by Dr. Charles Ewan, Director of the Phelps Archaeology Laboratory and Professor of Anthropology at East Carolina University, is that there is no evidence that Dawson’s findings are accurate. He writes, “Did the colonists have contact with the folks at Croatoan?  Almost certainly.  Is that where they ended up? Perhaps, but I see no solid evidence of it.  The alleged 16th century material is in the same context with definite 17th century material so the rules of stratigraphy say it has to date to the 17th century.” Dr. Alain Outlaw, principal archaeologist with Archaeological & Cultural Solutions, Inc. of Williamsburg and member of the history faculty at Christopher Newport University (CNU), described Dawson’s work as “storytelling, not evidence-based information.” Nick Luccketti, the Principal Investigator/Archaeologist for the James River Institute for Archaeology, was interviewed in 2016 about the project and he wrote, “I have not seen any evidence at Croatoan of artifacts that indicate that Englishmen were living there.” (1)

Dawson’s book; The Lost Colony and Hatteras Island, recognizes that there is no “smoking gun”(2) and that the book is not a “formal scientific report.” (3) This last point is very important because the research conducted by Dawson and Horton have not yet been subjected to peer review due to the lack of a final report. To be fair, Scott Dawson did not write the sensationalist headlines that have appeared in local newspapers, but his work makes very strong suggestions that he has unearthed the true fate of the 1587 colonists with indisputable evidence. Dawson writes, “Not only did we find sixteenth-century English artifacts in the Croatoan Indian villages but also evidence of assimilation. We now know not just where they went but also what happened after they got there.” (4)

Without an archaeological report, without peer review, can we say with certainty that Dawson’s conclusions are accurate? At best, what we currently have is a theory that Scott Dawson is passionate about. Scholars remain dubious that anything new or definitive has been discovered via this latest pursuit of a mystery that has captivated America for more than four centuries.

Mystery solved? Not so fast! There are too many unanswered questions, too much similar material culture in other areas around Roanoke Island and inland, and no forensic evidence to back up a strong claim to having unlocked the mystery. To be sure, Dawson’s book successfully explores primary sources of the period and gives us a fine analysis of how the colonists were caught up in the conflicts of the Indigenous people, as well as the broader conflict between England and Spain. If you want a concise report of these fascinating rivalries, Dawson’s book will suffice. However, if you are looking for a work that provides the ultimate answer to what happened to those 114 people, you may be disappointed. The mystery continues. 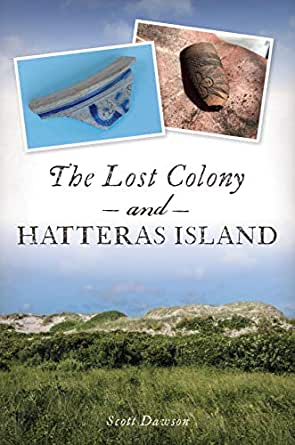 (Above) The front cover of Scott Dawson’s new book, “The Lost Colony and Hatteras Island.” 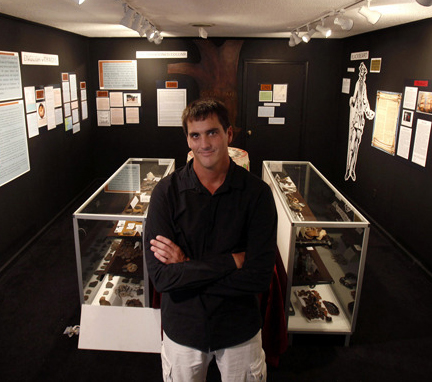 (Above) Scott Dawson, president and founder of the Croatoan Archaeological Society, Inc. 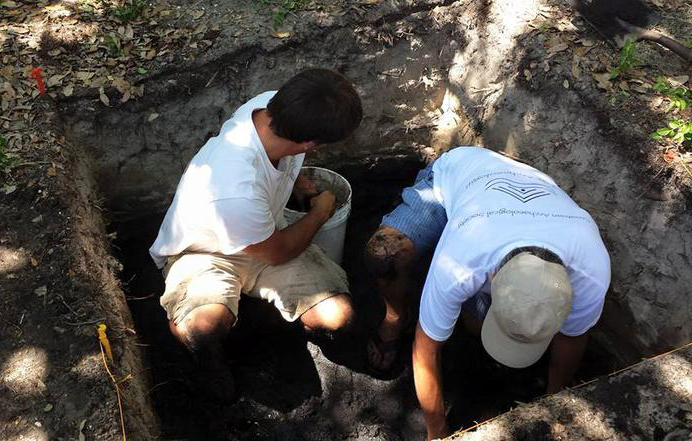 (Above) Scott Dawson and his father, Dave Dawson, participating in a 2015 dig conducted by the Croatoan Archaeological Society, Inc. 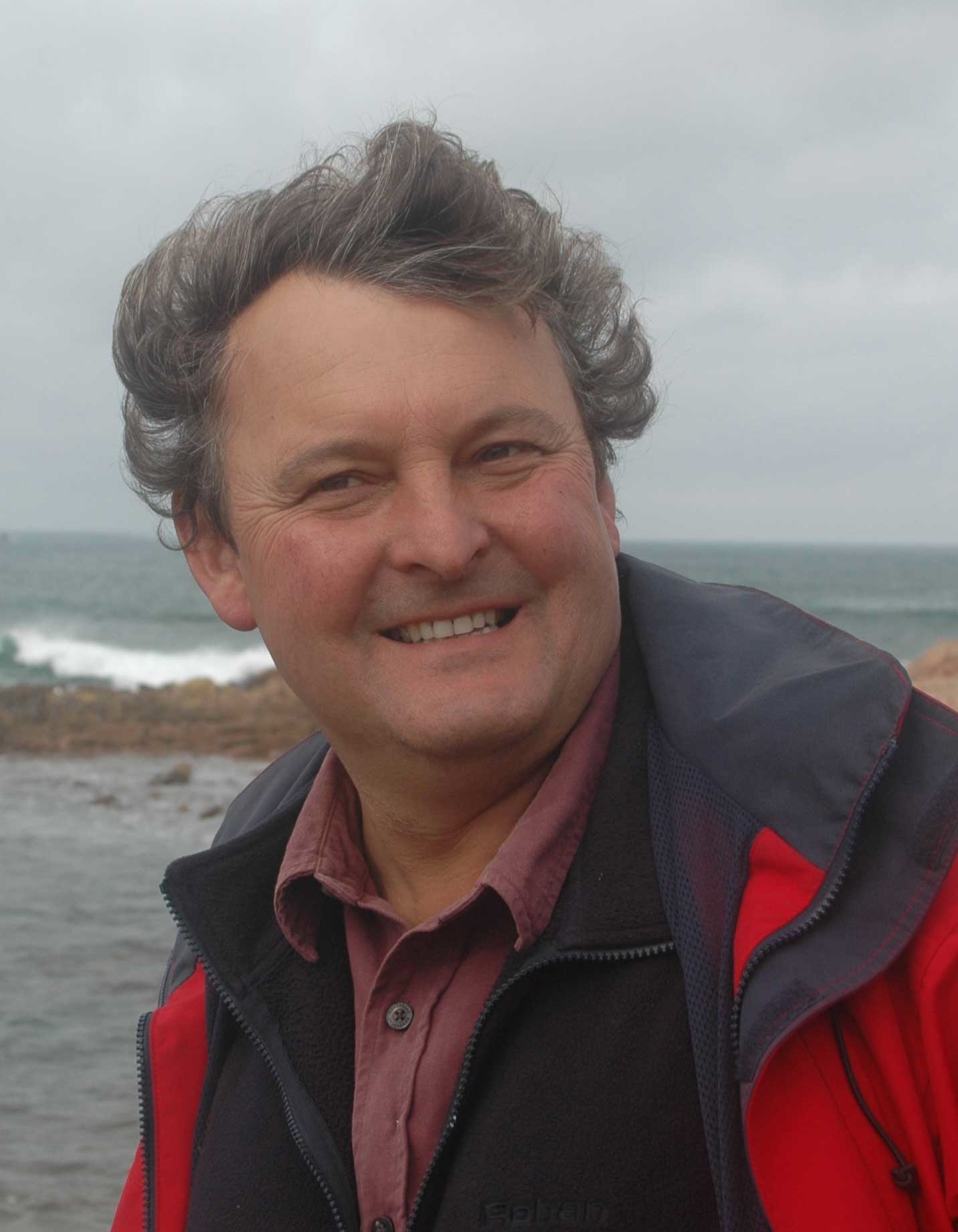 (Above) Photo of Dr. Mark Horton, Program Director of MA Maritime Archaeology and History at the University of Bristol, UK.