Part 1: Religion and the Commonwealth

Religion and the Commonwealth

This is part one of a three-part series discussing the period known as the Interregnum; the period in England when Oliver Cromwell became Lord Protector of the Realm following the execution of King Charles I. How did this country come to the point of regicide (the killing of a King) and what was its effect on religion and the Church of England? Part one will deal with the lead-up to the Commonwealth and issues in England. Part two will concern the continued conflicts in Scotland and Ireland and part three will focus on England’s Colonial possessions in Virginia, Bermuda, and Barbados as well as in other Colonies.

The Sixteenth and Seventeenth Centuries were marred by unspeakable violence in Europe. The French Wars of Religion, the Eighty Years War, and the Thirty Years War produced casualties in the tens of millions. England was able, for the most part, to avoid the devastation of the Thirty Years War. The reign of James I (also known as James VI of Scotland) was relatively peaceful compared to his European Counterparts, the Gunpowder plot notwithstanding. King James sought to control the more radical factions of Recusants on the one side and Puritans on the other, but neither group presented itself as a serious threat to James’ authority in the Church of England. Though King James was opposed to a new “authorized” version of the Bible in the English language, he acquiesced along with some alterations of the 39 Articles to give them a more Calvinist bent.¹ In return James maintained the conformity of the Realm to the episcopacy, a church under the direction of Bishops. However, this Jacobean period of peace would erode quickly after March 27, 1625, the day King James died at Theobalds Palace.

Charles I and the road to Civil War

Charles I was crowned King that same day but had very different ideas of what the church was going to be. Ten years into his reign, King Charles I elevated William Laud to the Archbishopric of Canterbury. Laud was quickly received as a man in favor of “popish innovations,” a derisive terminology used in reference to recusant Catholics. Laud, though hardly Catholic in his leanings, did favor a more sacramental worship that struck his detractors as being too Catholic in nature. Laud was part of a movement known as Arminian theology that was more focused on liturgy and less on preaching. This focus was sure to raise the ire of the more Puritan-leaning Christians. It was Laud and King Charles’ desire to create a uniform church that would bring the radicals on both sides to their heels. Those who opposed this uniformity were dealt with severely, such as the pamphleteers William Prynne, John Bastwick, and Henry Burton who wrote scathing tracts against episcopacy and thus had their ears cut off as punishment.²  With increasing tensions between the more Puritan-leaning Parliamentarians and the Crown, Charles I dismissed Parliament in 1629 to rule without them until war broke out with the Scots in 1640 known as the Bishop’s Wars. The Parliamentarians were more inclined to back the Presbyterian Scots than their own Monarch and two years later, England was plunged into the first of three civil wars.

Though Scotland had fought a war against King Charles in 1640/41 in the Bishop’s Wars, they came to the King’s aid as prospects of a Parliamentarian victory were increasing. Charles had made a secret deal that would have allowed for a Presybeterian model in England for three years, however, the forces under Cromwell and Lord Thomas Fairfax were to ultimately triumph. During these latter days of the second civil war, numerous attempts were made to find a compromise with the King regarding the extent of his power and his control over the religious landscape. Various Dissenters spoke of the need for “liberty of conscience,” and Charles was offered a few ways out of his predicament, the first of which was the so-called Newcastle Propositions. The Scots, whom Charles had once opposed, now offered to restore him to the throne in exchange for a Presbyterian form of government and to surrender control of the army for twenty years. Charles deemed these terms as totally unacceptable and he was returned to the Parliamentary forces.

Parliament may have had custody of the King but as the Earl of Manchester pointed out; “If we beat the king 99 times he will still be our king and we his subjects. If he beats us but once, we shall all be hanged.”  The “New Model Army,” as the Roundheads were known, offered King Charles the most lenient offer to restore the Crown while retaining enough control to subdue his authority. The “Heads of Proposals,” were put forth by Henry Ireton, Cromwell’s right-hand man, and John Lambert an officer of some repute. The terms were generous, Episcopacy would be restored but with a limiting of the power of the Bishops, no Royalist would be able to run for a seat in Parliament for five years, the laws pertaining to mandatory use of the Book of Common Prayer/compulsory attendance at Anglican services would be revoked, and Parliamentary approval for would be needed to declare war. In response, Charles stalled for time which proved to be a fatal error. More extreme proposals came from the Levellers in the Putney Debates, which produced the “Agreement of the People.” This proposal would have, for all intents and purposes, reduced the monarchy to a figurehead. Charles, of course, would never agree.

In late 1647, the so-called “Engagement” agreement was forged between the Scottish forces and Charles I. The Scots were concerned by the more radical, independent factions in England and sought to strike a deal with the King. The proposal would install a Presbyterian form of government for three years and the suppression of the Independents, the Scottish Army would move to invade England and support the Royalists. Unfortunately for King Charles however, the Scottish Army was ill-prepared to face the New Model Army and the Second Civil War would end in their defeat. Cromwell and the other leaders were no longer in a conciliatory mood and Charles’ fate was sealed. In January of 1649, Charles was put on trial with Henry Ireton taking the lead in his prosecution. Charles, refusing to recognize the authority of the Court, was condemned to die and on January 30, 1649, the unthinkable happened at Whitehall.

In March of 1649, the Monarchy and the House of Lords were abolished by the new government. Almost immediately the new regime was plunged into another war, this time with Ireland. The third English Civil War was fought in order to suppress any attempts by the exiled Charles II to use Ireland as a base for an army of restoration. Cromwell led the English Army in a bloody two-year subjugation of the Irish people. Lands were confiscated and a Protestant church was imposed. Cromwell then moved on to Scotland where Charles II had been crowned as King. At the battle of Dunbar, Cromwell split the center of the Scottish line and gained a rather unexpected victory. A second Scottish uprising was defeated a year later in 1652. Cromwell further gained military credibility by winning a naval victory against the Dutch in what is now called the First Anglo-Dutch War (1652-54). Cromwell would now have a united British state to govern.

The Religious Landscape in the Commonwealth

The Rump Parliament, as it was known, passed laws of toleration that would undo the oppressive religious laws under the monarchy. However, it had unintended consequences. The number of radical sects increased and they wanted even more liberties than the Rump Parliament was prepared to offer. The Army, which was the real power in the Commonwealth, grew weary of the Rump Parliament and in April of 1653 Cromwell brought them in and Parliament was dissolved. Now, as Lord Protector, Cromwell had as much power as any King before him. Cromwell was committed to the cause of religious liberty including the suspension of the persecution of Roman Catholics in England and the abolishment of the tithe (church tax). At the same time, he sought to raise the level of clergy salaries to induce a higher caliber of clergy for the benefit of the people but the English Reformation had produced far more radical groups than even Cromwell could countenance. First among these were the Quakers or Friends, George Fox and these early Quakers were far more radical than those who followed. Fox met with Cromwell to move him to repeal laws that prevented Quakers from disrupting services in Anglican churches, to which Cromwell refused. Other groups like the Levellers wanted more radical reforms, while many in the subsequent Parliaments were eager for a return to a more conservative government and church polity. Simply put, the religious landscape under the Lord Protectorate was as chaotic and unstable as anyone had ever experienced in the Realm. Cromwell would die suddenly on September 3, 1658, and the Commonwealth began its descent. Ultimately, Cromwell never realized the “godly government” that he had envisioned. 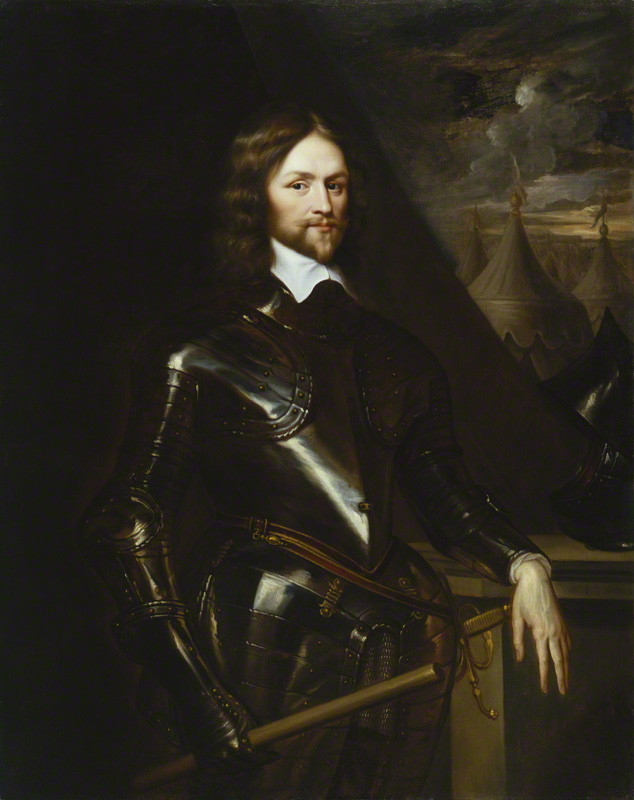 Above: A portrait of Henry Ireton, the English general in the Parliamentarian army during the Wars of the Three Kingdoms, and the son-in-law of Oliver Cromwell. 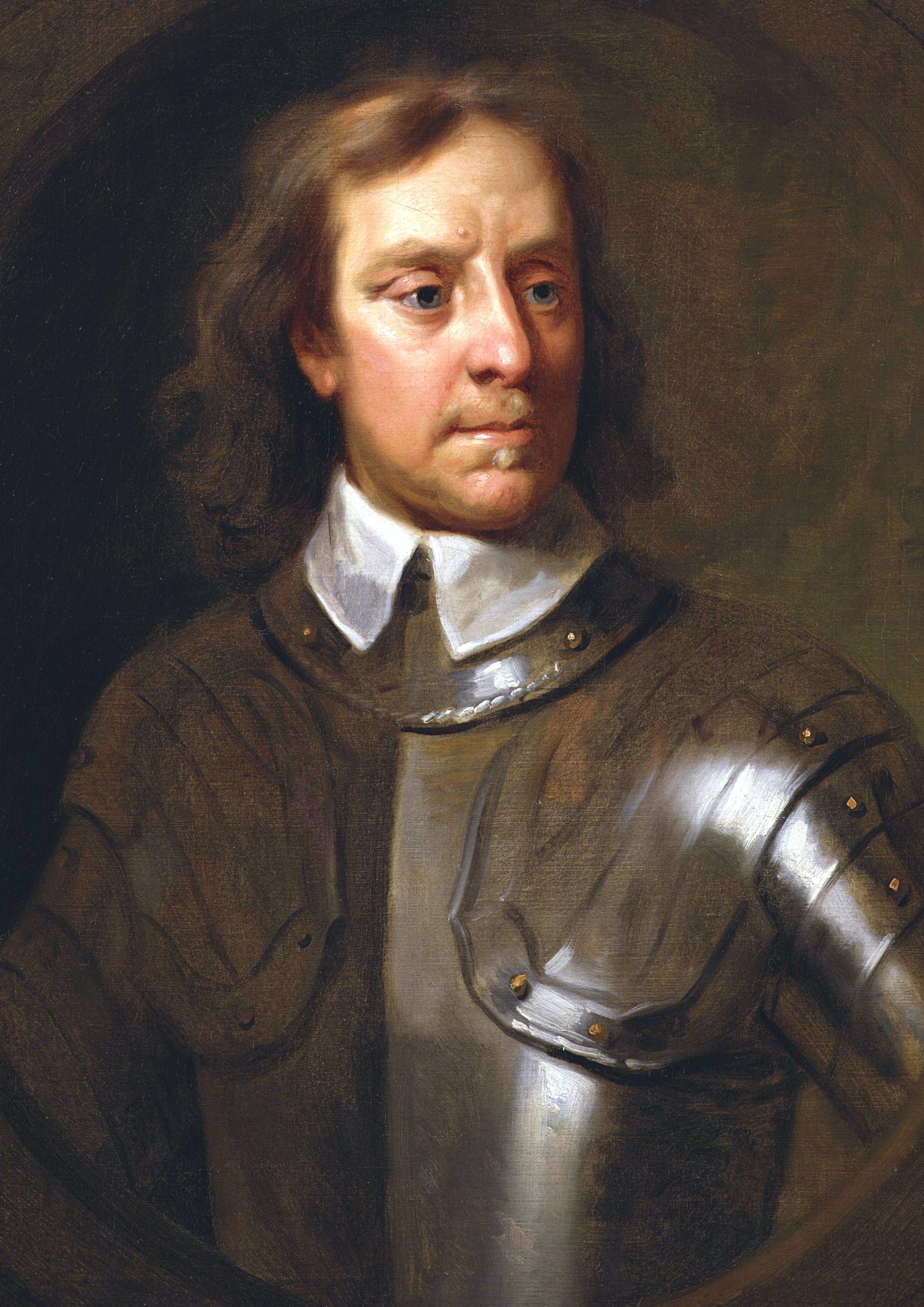 Above: A portrait of Oliver Cromwell, the general who became Lord Protector of the Commonwealth. 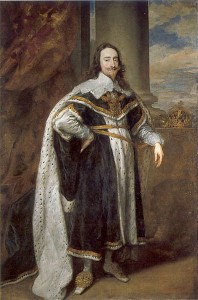 Above:  A portrait of King Charles I, the last monarch of England before the Interregnum. 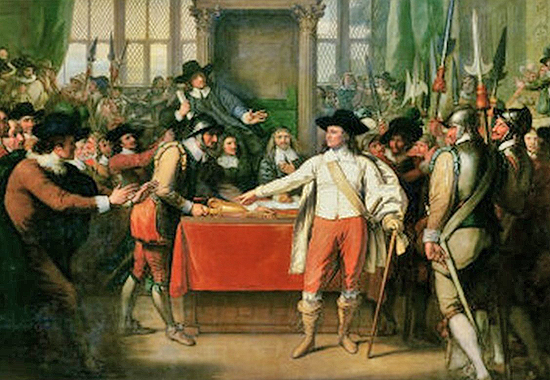 Above: A portrait of the Dismissal of the “Rump Parliament” in 1653. 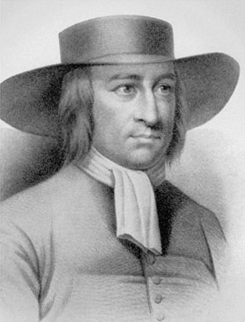 Above: A portrait of George Fox, the principal founder of the Society of Friends or Quakers.