Something Wicked, This Way Comes — to Virginia.

Today we usually only think of witches at Halloween… ugly wicked hags who wear pointy black hats and fly around on brooms.  It is interesting, however, to look at the historical truth — which doesn’t begin in Salem, Massachusetts. Did you know that we had supposed witches and devils here in Virginia long before they appeared up in Massachusetts?

When those three small English ships, the Susan Constant, the Godspeed, and the Discovery, arrived off the coast of Virginia in April of 1607, they brought with them 104 men and boys who would construct a wooden palisade at a spot which they called Jamestown, named for their King, James I. Thus, the first permanent English settlement in North America was established. And the settlers themselves brought their thoughts of home, along their cultural ideas and beliefs. Unfortunately, among their beliefs was the conviction that witches were alive and thriving in the world.

You must remember that the seventeenth century was an age when ideas of witches, demons, sorcerers, and sea monsters, were accepted by almost every Englishman, regardless of his social or intellectual station in life. It is reflected in the literature of the time… Just look at Christopher Marlowe’s Doctor Faustus and William Shakespeare’s Macbeth, Midsummer Night’s Dream, and The Tempest. Why, even good King James himself got into the act by writing a book called Demonologie.

Therefore, it is not surprising that Virginia, with its dark forests and strange native inhabitants must have seemed quite frightening indeed. King James had written that the Devil’s handiwork was “thought to be most common in such wild parts of the world.” It was almost a foregone conclusion that the English would look at the local Powhatan Indians as barbarians who worshiped idols and were under the influence of Satan.

And so, starting with Captain John Smith, the English found the Devil in Virginia… Upon their first meeting, Captain Smith described the chief of all the local tribes, the great Powhatan, as “more like a devil than a man.” Master George Percy described the first Indians he encountered in Virginia as “so many wolves or Devils.”  Other Englishmen echoed their views. In 1612, after a military expedition up the Nansemond River, young Alexander Whitaker wrote that, “there be great witches amongst them and they very familiar with the devil.” He continued that the Indian priests belonged to “a generation of vipers even of Satan’s own brood” and “are no other but such as our English Witches are.” William Crashaw wrote of Virginia, that “Satan visibly and palpably reigns there, more than any other known place of the world.”

Although the early Virginians were supposedly surrounded by witches and devils, they initially had too many other things to worry about (Remember the “Starving Time?”), so they never really conducted any legal witchcraft investigations until things were a bit more stable.

But then they began to look among themselves…  In September of 1626, Joan Wright of lower James City County (now Surry County), was accused of witchcraft and brought before the General Court at Jamestown to be examined. The governor, Sir George Yeardley, presided as chief justice to determine if the accusations were true. The court records are fragmentary but provide an insight into witchcraft beliefs of the time.

The primary witness against Mrs. Wright was Lieutenant Giles Allington. He stated that he had spoken to Mrs. Wright, who was apparently a midwife, concerning the care of his wife during a pregnancy. Unfortunately, Joan Wright was left-handed and of course this was considered “sinister” at the time. In fact, the idea of a left-handed midwife upset Allington’s wife so much that she frantically made her husband obtain a second midwife. According to Lieutenant Allington, this brought misfortune to his family. In court, he swore that when his wife gave birth to their child, “the said goodwife Wright went away from his house very much discontented.” In short order, his wife’s breast grew sore and Allington fell ill. After that, his new child fell ill, recovered, and fell ill a second time before dying in “extreme pain.” Joan Wright was obviously a witch!

Whatever we may think about such an accusation today, it was serious stuff back in 1626… If it could be proved under the law, this evidence of causing pain, sickness, and the death of a child, was more than enough to convict Mrs. Wright of witchcraft. And the penalty for felonious witchcraft in early Virginia was death by hanging.

Other witnesses came forward. A man named Booth said that although he could not be sure it was Joan Wright, he had been crossed by a woman and could not hit any game that he shot at for a whole year. Rebecca Graye told how Mrs. Wright had predicted that she would soon bury her husband. She testified that a Mr. Felgate and Thomas Harris had also received similar warnings concerning their respective spouses.

At least four more witnesses swore before the court that Joan had done everything from threatening servants to causing property destruction. Finally, her husband was brought before the court, where he could only state that he had been married to Joan for sixteen years and knew nothing of her supposed crimes.

What would your verdict have been? Was Joan Wright an agent of the Devil, set upon the destruction of the good people of Virginia? Or was she just an unfortunate victim of a tragic part of our history?

Unfortunately, although we have the records of the examining court, all records of Virginia’s criminal court from this period were lost during the Civil War so there is no documentary evidence of a verdict.  We just do not know what really happened to Joan Wright. What we can say, is that Joan Wright was America’s first real alleged “witch.” 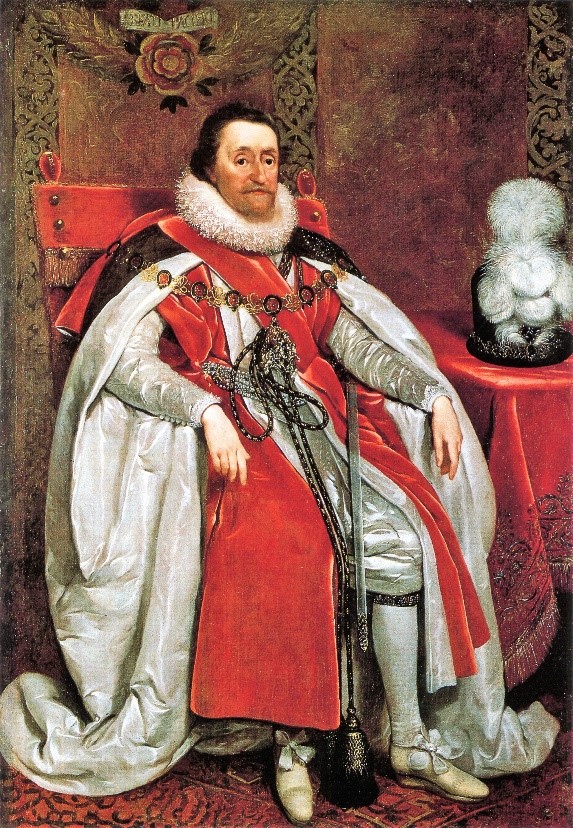 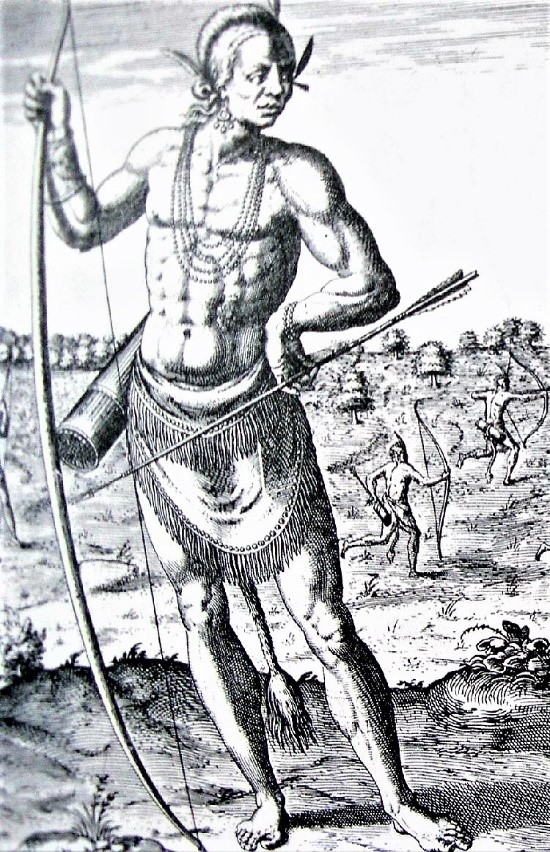 Engraving of by Theodor de Bry of a Powhatan Indian, 1590 after a John White watercolor, 1585. 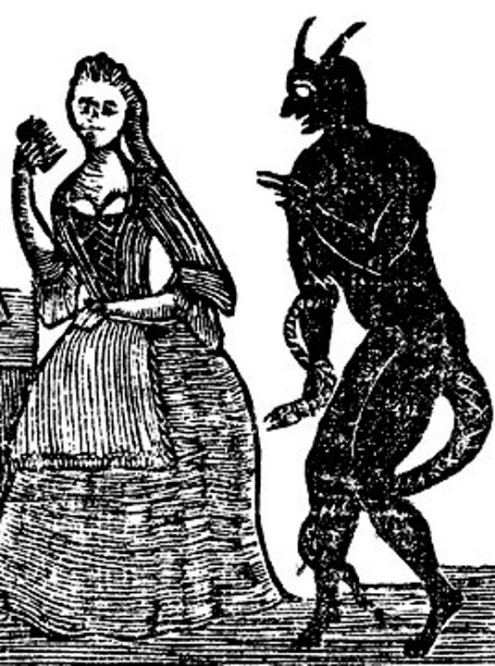 English woodcut of a meeting with Satan. 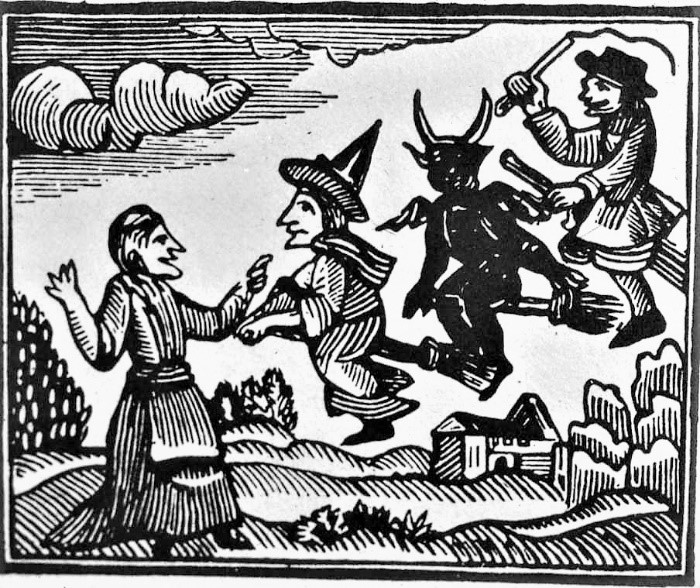 Witches and devils on brooms. 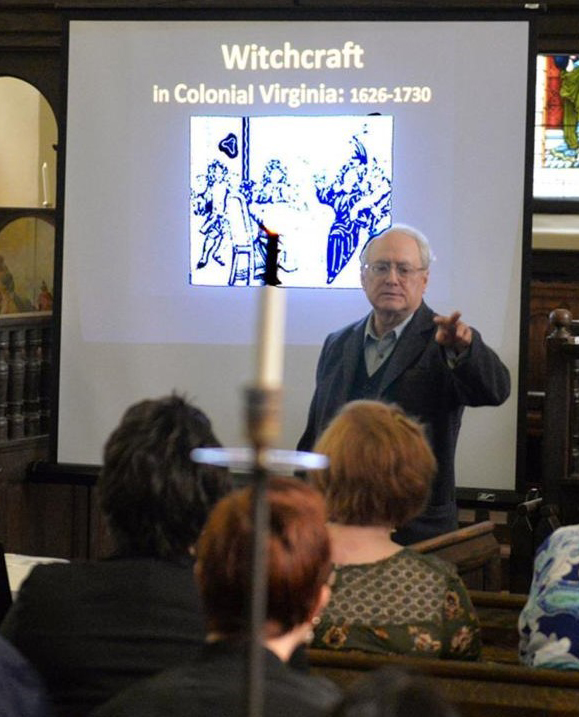 Carson Hudson is passionate about history. He is a practicing military and social historian, published author, Emmy Award-winning screenwriter, and circus fire-eater. He lectures regularly on a wide variety of subjects, but his particular interests are the Civil War, colonial witchcraft, and 19th Century American music. He performs regularly as part of the old-time music duo Hudson & Clark, and with the Cigar Box String Band. In his spare time, he likes to sleep.

His latest book is Hidden History of Witchcraft in Colonial Virginia, available through History Press, Barnes & Noble.com, or Amazon.com