The Banner Weathervane: Featuring the Collection

One of the oldest weather instruments, the weathervane, also known as vane, wind vane, and weathercock, is a device that turns freely on an upright rod to show the direction of the wind.  Frequently in the shape of an arrow, weathervanes are also square- or rectangular-shaped flag-like banners (French banniere) that mimic the earliest forms, which were likely fabric.

St. Luke’s staff recently found the Banner Weathervane in storage in a deteriorated condition.  It required immediate attention, thus Archaeological & Cultural Solutions, Inc. (ACS) of Williamsburg volunteered labor and conservation materials to ensure that this vital artifact is stable and ready for display when conditions permit.  Laboratory Supervisor Mary B. Clemons oversaw the preservation in the ACS archaeological laboratory at Christopher Newport University (CNU) in Newport News. A William and Mary graduate, Clemons has honed her curation and conservation skills working for ACS for two decades. Laboratory volunteer and professional blacksmith Al Shriver assisted in the conservation. Shriver provided invaluable observations about the construction of the weathervane gleaned from reproducing colonial iron objects. In addition, Laboratory Assistant Matt Haley, my former student at CNU, conducted the conservation by removing salts in a distilled water bath and then by mechanically cleaning the piece using air abrasion.  He coated the conserved metal object with a protective sealant to prevent further corrosion. The team combined skills and expertise to complete the conservation in December 2021.

(Above) Weathervane after conservation, as seen from the ground when working (based upon mounting tube wear pattern). Scale in tenths of feet.

The St. Luke’s weathervane appears to date to the colonial period and perhaps to the church’s formative years.  Indeed, its rectangular form and five fleur-de-lis design closely resemble vanes at London’s Southwark Cathedral located on the south side of the River Thames.  There, the current (1818) weathervane is based upon an earlier (1689) version.  In addition, the style mirrors banners on medieval castles. It fits well with the Gothic architectural elements at St. Luke’s Church.

The St. Luke’s vane crowns the tower in an 1884 photograph, taken just a few years before the 1890s restoration.  At that time, it was nonfunctional, bent in a tilted position, and pierced by still visible bullet holes/dents. The 15 impacts on its surface were caused .50 – .70 caliber bullets and .22 projectiles when it was probably used for target practice.  Detailed Historic American Buildings Survey (HABS) drawings and photographs of existing conditions in 1936 show a working weathervane restored to the vertical position.  The original was placed in storage and, currently, a reproduction is in place on the tower.

Hand-forged, this iron object weighs 14.5 pounds and it is slightly over 2’x 2’ in overall size. It consists of three elements: the mounting tube that once fit over and turned on a vertical rod; the sheet-iron vane held in place in the tube by five rivets; and five decorative fleurs-de-lis, each individually attached to the vane by two iron rivets. Three fleurs-de-lis are centered along three sides of the vane and two larger versions are connected to the outer corners.  The fleurs-de-lis with beveled edges were carefully cut using a cold chisel.  They were skillfully thinned and their bases were feathered into the plate; thus, their thickness is the same as the vane.  The three petal design of the fleur-de-lis is often associated with the Christian doctrine of the Holy Trinity – God the Father, God the Son, and God the Holy Spirit.  In this case, there is no ambiguity regarding the intent of religious representation, as in this simplified, vernacular example, the devices are attached directly to the banner.  A lower collar and three inverted petals are usually seen in secular versions of the heraldic fleur-de-lis, but they are absent here. 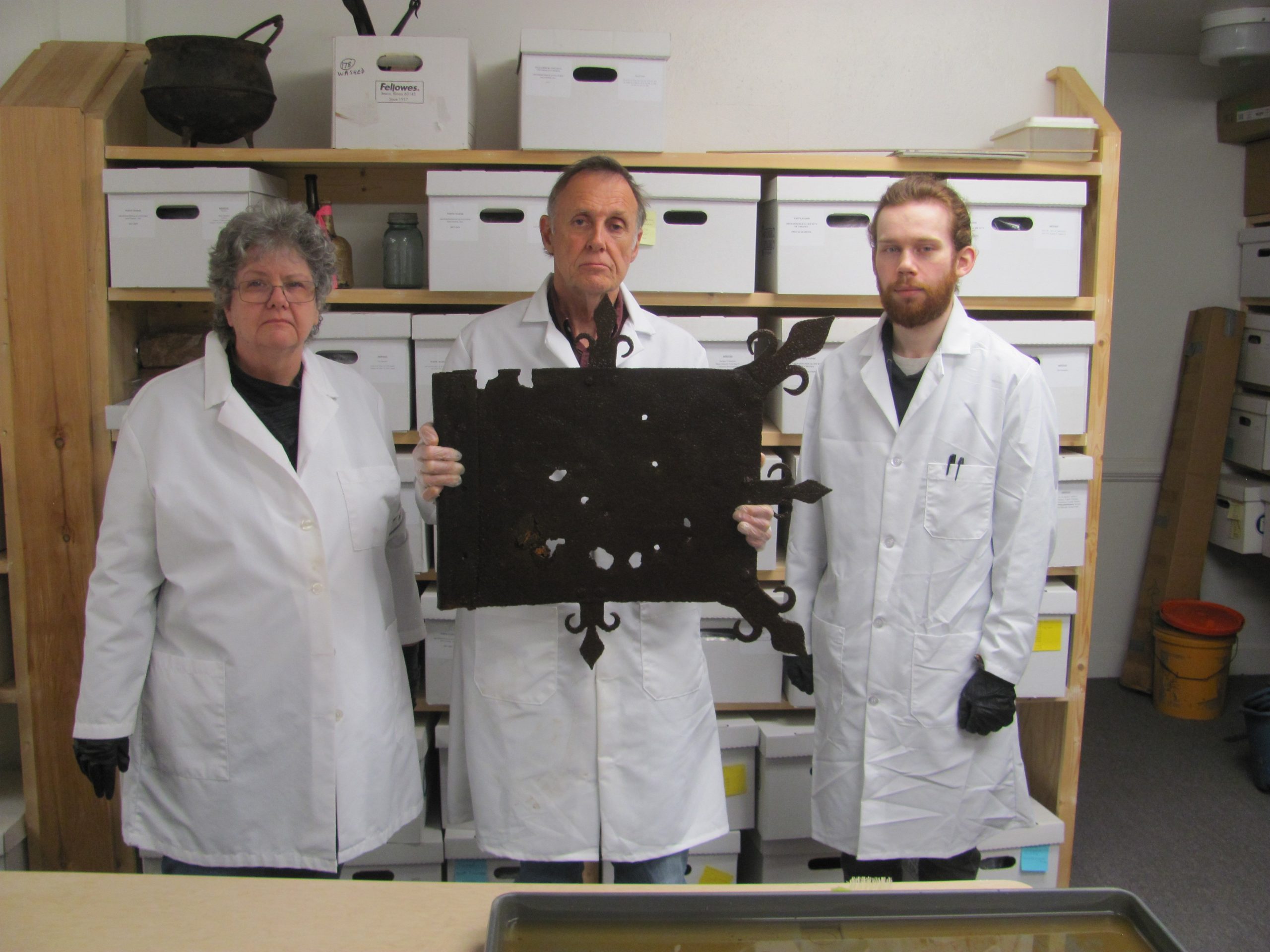 (Above) ACS conservation team, left to right: Mary B. Clemons, Al Shriver, and Matt Haley. Photo in ACS laboratory at the beginning of the weathervane treatment. 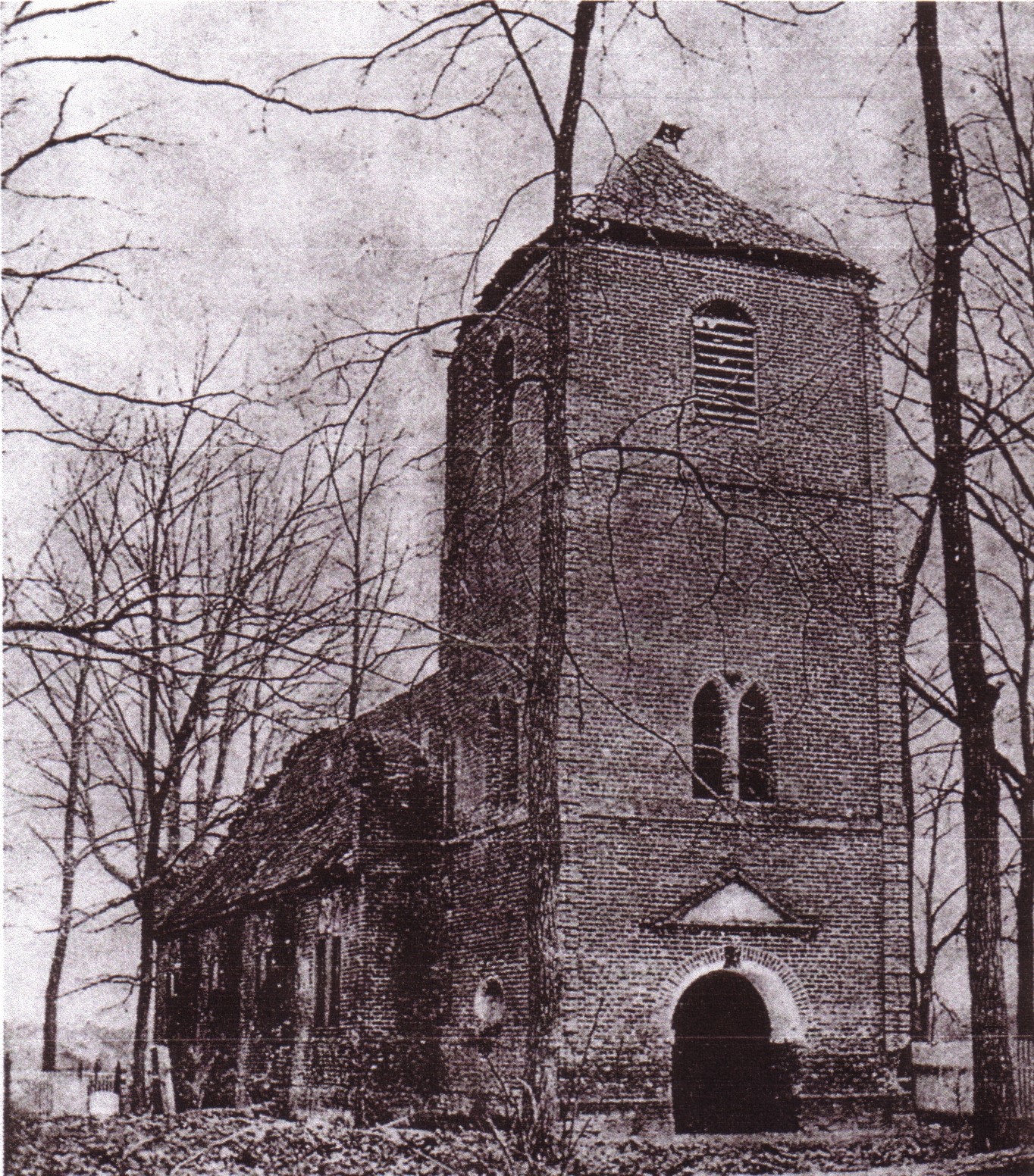 (Above) Photo published in 1884. Note damaged weathervane on top of tower. 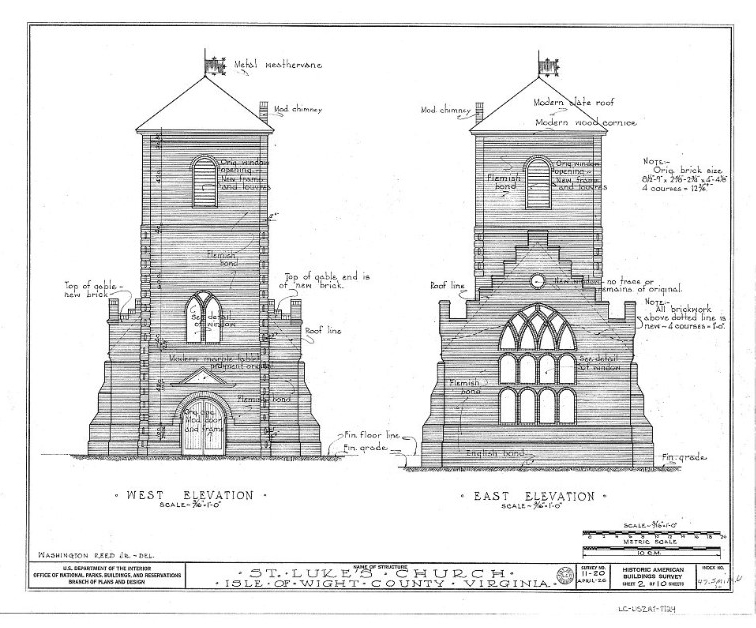 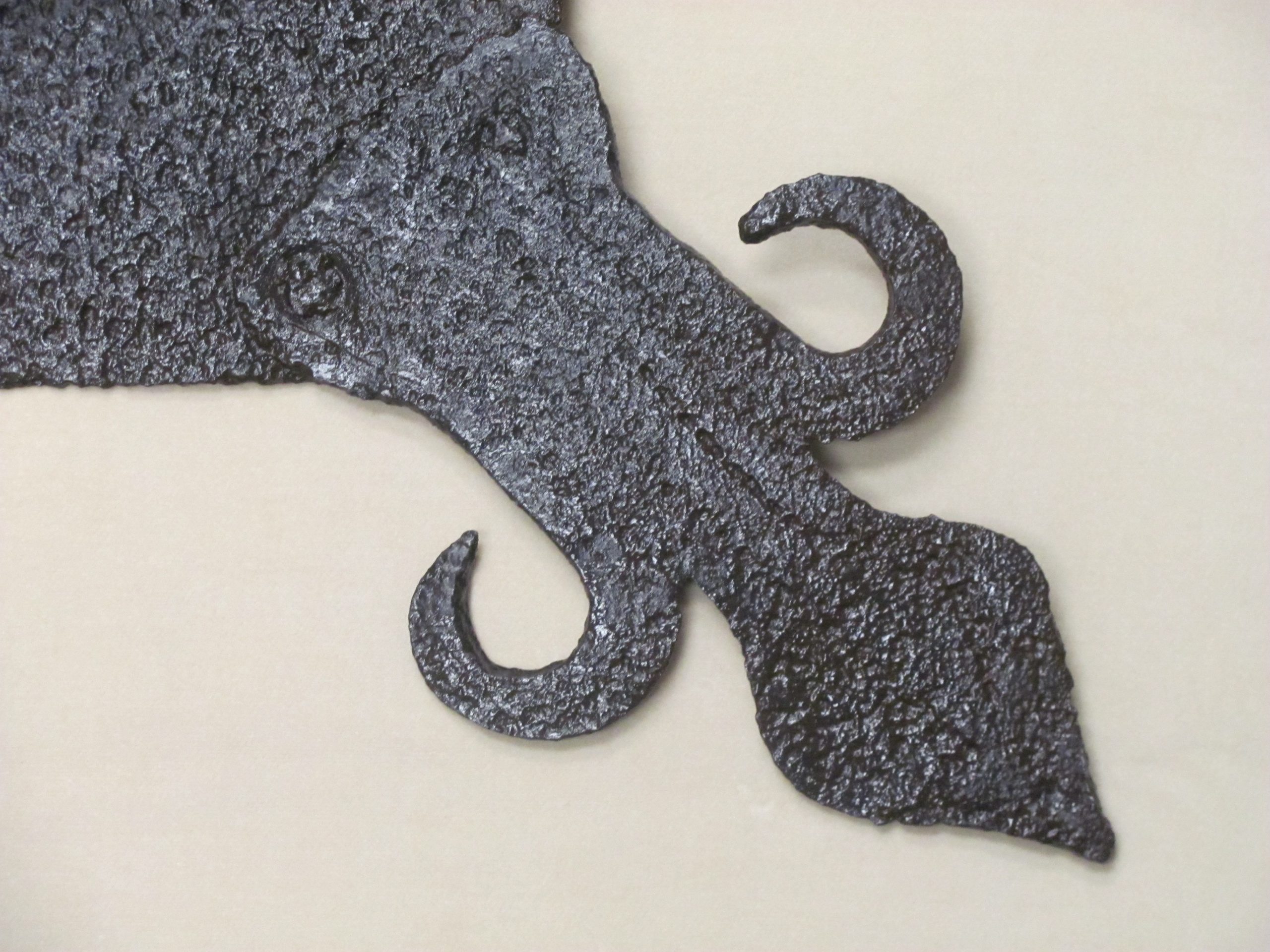 (Above) Detail of reverse of weathervane, showing a corner fleur-de-lis.

The weathervane preservation project was undertaken in memory of my son, Andrew Bridger Outlaw (1985-2003), a direct descendant of Joseph Bridger I, major seventeenth century benefactor of this church.  He was baptized at the St. Luke’s font on June 2, 1985.  Andrew loved flags, making the preservation of this iconic decorative banner, which graced the highest point of the church, a fitting memorial to his short, well-lived life.  Characterized by wide-ranging community service, his accomplishments were celebrated and recorded in Virginia General Assembly Senate Joint Resolution No.151 in 2004. 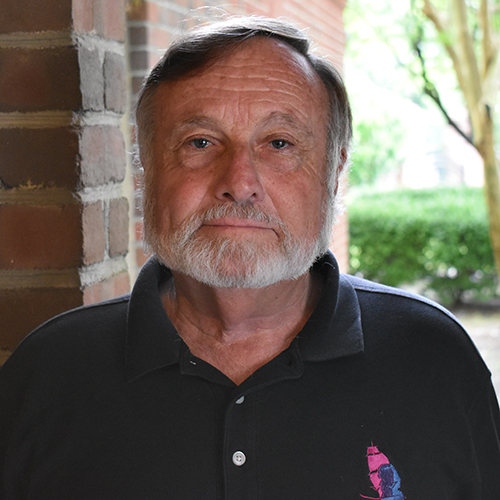 As Principal Archaeologist with Archaeological & Cultural Solutions, Inc., President of the Wheatland Foundation, Inc., and Adjunct Professor in the History Department at Christopher Newport University, Alain C. Outlaw has directed multiple projects since 2007 at St. Luke’s Church and at Whitemarsh, the Joseph Bridger plantation.  A professional archaeologist for nearly 50 years, he has worked in state government (Commissioner of Archaeology/State Archaeologist for the Commonwealth of Virginia), the Private Sector, and Academia.  Among his publications is Governor’s Land: Archaeology of Early Seventeenth Century Settlements (1990 University Press of Virginia).