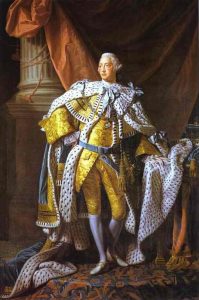 The Revolutionary War created a dilemma for clergyman who had taken an oath of loyalty to the head of the Church of England, his Majesty King George III. By the 1770’s English clergy were facing a stark choice, stay and join the patriot cause or go back home to England to maintain their status within the Church of England. But, some Loyalist Clergy also decided to stay. Patriots within the Church were often making life difficult for these Loyalist Rectors. Confrontation even within the context of worship was not unheard of and the conflict could divide congregations. Quakers had the internal conflict of promoting pacifist ideals while also wanting to support and protect the Colony of Pennsylvania that was their safe harbor.
The question is raised who are the traitors? Those who remain loyal to their mother country? Or those who sought independence and the many freedoms that were central to the cause? The conflict would divide families and religious communities, especially in Virginia where the Established Church was central to the Community’s life for more than 160 years.

God Save The Kingdom: Loyalism and Ministers in Revolutionary Virginia

On  Saturday, August 27th at 1pm, Stephanie Anne Seals Walters, a candidate from George Mason University, will present her scholarly findings entitled; “God Save the Kingdom; Loyalism and Ministers in Revolutionary Virginia 1765-1783. Stephanie will focus on Tidewater and Chesapeake regions and take a look at the last Colonial Rector of the “Old Brick Church (later St. Luke’s) the Rev. William Hubbard. Hubbard remained on the Glebe (the farm land that each parish owned) until his death in 1804. Was Rev. Hubbard therefore a Patriot? There were Hubbards who were well know Loyalists, was Rev. Hubbard a Loyalist? Come and hear the latest scholarship on this fascinating topic of Loyalist clergy in Revolutionary Virginia. Tickets are available online by clicking here. You can also purchase tickets over the phone by calling 757-357-3367. Tickets are $15.00
« VIEW ALL