“Walter Elmo Bloxom Jr. left this earth March 14, 2005, in a Richmond Hospital after battling a lung disease for several years. Walter was born Feb. 1, 1923, at Battery Park, Va. He attended Smithfield Elementary and graduated from Smithfield High School, later attending and graduated from Newport News Apprentice School. He served our country for two years as a tug boat captain in the Army during WW II. He attended and graduated from Virginia Tech with a Bachelor of Science in Mechanical Engineering in 1950. He went to work for Dupont Corporation and moved to Pensacola, Fla. In 1954, Walter and his wife moved to Chesterfield County, where he was employed by Dupont’s Richmond Division. Walter went to work for Continental Can Corp in 1955 in Hopewell and his term extended to 1974. He was with Continental Can Corp and was transferred to Augusta, Ga., to be Regional Manager of Construction Engineering. He retired in 1985 from Continental Forest Industries in Augusta, Ga., and began consultant work supporting the paper industry. In 1985, Walter and his wife moved to West Point. He was a member of First Baptist Church, a member of Knights of ACCA Temple and Masonic Lodge. Walter enjoyed life with his family and friends and played 74 of the top 100 golf courses in the United States. He was a kind and gracious man dedicated to his family. One of his many accomplishments included being elected President of the TAPPI Pulp and Paper Association. Survivors include his wife of 56 years, Frances Faison Bloxom; sons, Ron Bloxom and Walter E. Bloxom III and his wife, Vicky Bloxom; one granddaughter, Savanna Leigh Bloxom of West Point; one sister, Melinda Reynolds of Battery Park, Va…”1 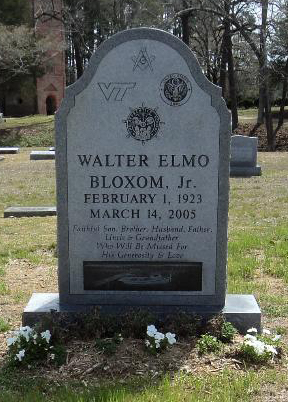