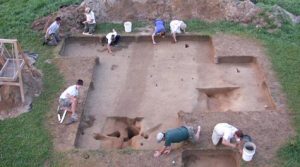 In 2002 to 2003 an archaeological dig in Gloucester VA uncovered evidence that suggests that it is the site of the capital of the Powhatan Confederation known as Werowocomoco, a city that dates back to 1200 C.E. .  The National Park Service is currently involved in a project to make the site a part of the NPS and be open to the public sometime in the not too distant future. 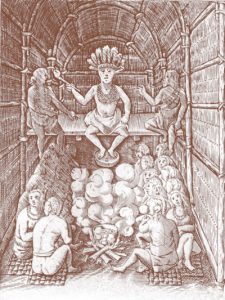 Most people know of Powhatan’s now famous daughter Pocahontas and her encounters with the first permanent English settlement in North America at Jamestown. John Smith tells of having been saved from certain death by Powhatan’s daughter, though many scholars dispute Smith’s account. What is certain is that the only encounter between Smith and Powhatan took place at this capital of Werowocomoco and that Powhatan, more accurately known as Wahunsenacawh, ruled over a Confederation of some 15,000 people. Werowocomoco was a center for the spiritual life of the Community as well as being the focus of government. Powhatan ruled the Confederacy through “werowances” or lesser chiefs. Among other discoveries by the team of Archaeologists is a footprint for a 72-foot longhouse on the site.1  During the starving time of 1609, Powhatan and his immediate community relocated farther west along the Chickahominy River to Orapakes (near present day New Kent VA). 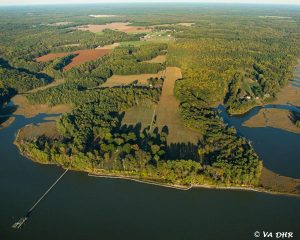 Commenting on the site, Joel Dunn of the Chesapeake Conservancy remarked; “The antiquity and spirituality of this place cannot be understated,” said Joel Dunn, president and CEO of the Chesapeake Conservancy. “Werowocomoco is the Machu Picchu of the Chesapeake. It served as the capital of the Powhatan confederacy for hundreds of years and is one of the most significant American Indian sites in eastern North America. We still have much to learn.” 2
At Historic St. Luke’s we have two stained glass windows that tell the story of this period. One is to Pocahontas and the other is to the Rev. Alexander Whitaker who is attributed with having converted Pocahontas to Christianity. The history of the Native Americans in this area is crucial to the story of our early American heritage.

On November 12, E. Randolph Turner a retired Archaeologist from the Virginia Department of Historic Resources will speak on “Searching for Powhatan’s Werowocomoco”.  To purchase tickets click here. We hope you’ll be part of these exciting symposia that focus on the under told narrative of the Native American experience in the aftermath of European settlement in the 17th century and beyond.